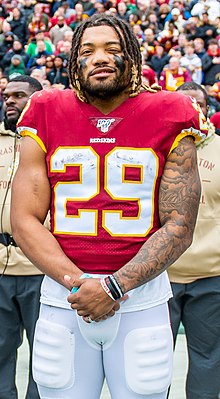 Guice was also charged with three counts of assault and battery and one count of destruction of property. According to the Washington Post, Guice turned himself in to Loudoun’s Adult Detention Center at around 5 p.m. ET.

The team issued the following statement:

“On Thursday we learned of a potential domestic violence related incident involving RB Derrius Guice. We immediately alerted the National Football League and have continued to work with them during this process. We then met with Derrius to inform him that he was excused from all team activity pending a review of this matter. This afternoon we learned that there were multiple charges filed against Derrius. Upon review of the nature of these charges and following internal discussions, we have decided to release Derrius immediately.”

He played college football at LSU, where he was the first player in Southeastern Conference (SEC) history with three career games of 250 or more rushing yards, before being drafted by the Washington Redskins in the second round of the 2018 NFL Draft. With the Redskins, he only appeared in five games in two years due to multiple knee injuries.