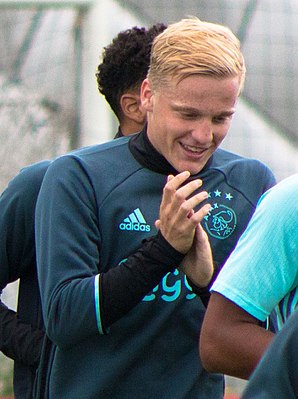 United agreed a fee around £40 million with Ajax for Van de Beek after he was left out of their preseason friendly with Eintracht Frankfurt on Saturday, according to ESPN.

United boss Ole Gunnar Solskjaer has tracked the Netherlands international for more than a year, with the club making an enquiry about his availability in January before signing Bruno Fernandes.

“Donny has all of the technical attributes needed to perform in this team and has the personality required to succeed at Manchester United,” Solskjaer said. “His ability to see space, time his movements and read the game will really complement the qualities that we have in midfield and his arrival really strengthens the depth of talent we have in that position.

Donny van de Beek (born 18 April 1997) is a Dutch professional footballer who plays as a midfielder for Premier League club Manchester United and the Netherlands national team.
Born in Nijkerkerveen, Van de Beek joined the Ajax academy in 2008. In 2015, he made his competitive debut for the club in a Europa League match against Scottish club Celtic. In the 2016–17 season, Ajax progressed to the UEFA Europa League Final, but lost to Manchester United. During the 2017–18 season, Van de Beek established himself as a key play in Ajax’s starting eleven. Following the 2018–19 campaign, in which Ajax reached the semi-finals of the UEFA Champions League, Van de Beek was listed among the 30-man shortlist for the Ballon d’Or. With Ajax, he won the Eredivisie title, KNVB Cup and Johan Cruyff Shield.
In international football, Van de Beek has represented the Netherlands at the youth level. On 14 November 2017, he made his senior international debut against Romania. – READ MORE »