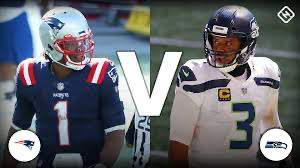 Qb Russell Wilson started their 1st drive off with an interception on the 4th play of the game. The throw that was intercepted resulted in a 43 YD pick 6 by Patriots DB, Devin McCourty. Once we saw this we all knew we were in for a thriller of a game!

But that didn’t faze the seasoned Seattle Seahawks Qb, Russell Wilson as he put a 13 play 75 YD drive together leading to a 4YD TD pass to WR Tyler Lockett . It was led mostly on the ground with himself scrambling twice to gain 27 YDS and Seattle Seahawks Rb, Chris Carson adding yards as well .

As the game progressed, it seemed as a back-and-forth trend was in play as every time the Patriots scored in the first half the Seahawks had an answer with a TD of their own.

The competitiveness was definitely in the air as the hard hitting Seahawks DB, Quandre Diggs was disqualified after a helmet to helmet hit/tackle on Patriots WR, N’keal Harry. Which had them both on the ground for seconds each. But, no one was taken for a concussion test.

As the 3rd QT began Cameron Newton and New England’s offense was brought to a halt from scoring a TD in 13 plays, 68 YDS that led to a Nick Folk 25 YD FG to bring them up ahead 17-14.

After the FG in the beginning of the 3rd the Patriots were quiet for the rest of the QT but for Wilson he threw 2 passing TDs to put the Seahawks ahead 28-17 heading to the 4th QT.

Cameron Newton did not back down to the challenge as he connected deep middle with Patriots WR, Julian Edelman on multiple occasion of drives in the 4th QT setting up for a short pass TD. Bringing the score to 23-28 after the 2 PT conversion play failed.

The Seahawks Russell Wilson was having a field day against the Patriots who were ranked #1 defense last season . As he threw 5 TD passes to 5 different receivers this game. He threw his last late in 4th QT to Rb, Chris Carson which put them up 35-23 with 4:24 in 4th QT.

When most viewers thought the game was on ice the Patriots put a 2:16 drive that included Cams ground game and mostly WR, Edelman in the air. Which resulted in a 1 YD TD rush by Cameron Newton to bring score 30-35.

The Patriots conserved their timeouts for the right time as they kicked off to Seahawks near the 2 minute warning. The Patriots defense stepped up in crunch time and forced the Seahawks to punt with 1:42 left.

Cameron Newton put together an impressive last drive and brought the ball all the way to the 1 Yd line where he tried to punch in a game winning TD. He was tripped by the pile and his FB, but in the end was stopped by Seattles defense for -1 YD by DL, Lj Collier and Lano Hill.