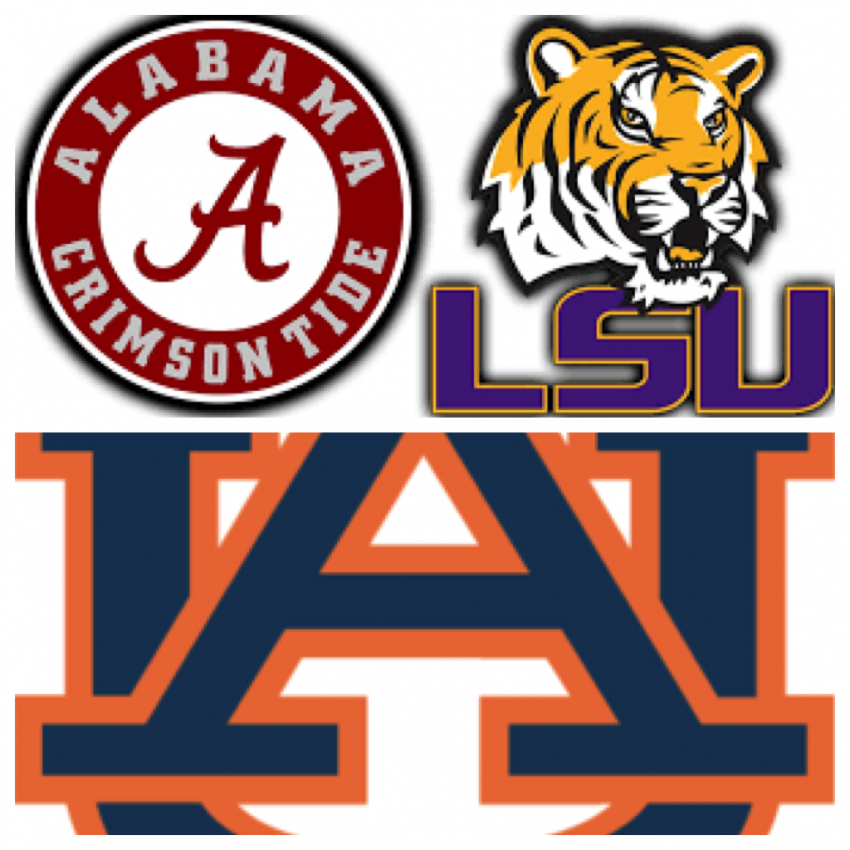 We are utterly days away from the start of SEC Football. No longer will we have to pass the time by watching the ACC, BIG 12, or whatever games the networks try to through our way. Don’t get me wrong, it was a great way to appease our hunger for college football. As a lifelong fan of the SEC, I can say that it just wasn’t good enough. I even succumbed to watching Kansas vs Coastal Carolina for crying out loud. Soon, our appetites will be satisfied. So, what should we expect from the 2020 version of the SEC’s top 3 Western Division teams?

Alabama: It comes as no surprise to many that the Crimson Tide has been crowned the favorite to win the conference. This assessment is not without merit. Nick Saban and company return a loaded squad who are anxious to atone for falling short of their accustomed goal of a national championship. For many, a 10-win season is quite the accomplishment. Don’t tell that to Nick or his team though.

Leading the way is Mac Jones, who many feel could play his way into a 2021 NFL Draft selection in the first round. His supporting cast is highlighted by arguably the best offensive line in the country. With protection in place worthy of shielding the castles of Asgard, Jones has two Heisman candidates at wide receiver in Devonta Smith and Jaylen Waddle.

It is worthy to mention that Smith may even be coming in with a chip on his shoulder. In 2019, he had 68 receptions for 1,256 yards and 14 touchdowns. Despite those impressive efforts, he was snubbed when it came to consideration for the Fred Biletnikoff Award. He may leave this season with that award and possibly the Heisman as well.

The plethora of good fortune does not stop there for Mac Jones. Just behind him sits possibly the best backfield in the nation led by another Heisman candidate, Najee Harris. Harris expects to be a worthy candidate for the honor. During the offseason, he trained relentlessly with NFL players and even went so far as to create a YouTube series documenting his journey. These efforts rewarded him with an even more chiseled physique and 40 time in the low 4’s.

He is accompanied by Brian Robinson Jr, who many NFL scouts have their eye on. 2020 also marks the highly anticipated return ofTrey Sanders. Many say that he is ready to blow the doors of the hinges.

With all the offense has to offer, a lot of the eyes across the board will be fixated on the defense. The 2019 campaign was marred with injuries, inconsistent play, inability to get off the field on 3rd down, lack of leadership, and the list goes on and on. Quite simply, they didn’t play to the Alabama standard. That is something this group is taking personal.

Business is about to be good again as NFL Draft prospects Dylan Moses, Josh McMillon, and LaBryan Ray all return from injury. Let us not forget about Patrick Surtain Jr and Josh Jobe. They anchor a Tide secondary who look to make life a living nightmare for opposing quarterbacks. However, that’s assuming signal callers will have time to get passes off.

Why do I say that? Well, if you ask the Tide nation, two words come to mind, “Christian Barmore”. In 2019, he was easily the most disruptive force up front in the SEC. That came only playing in limited action. Now, the time to “release the beast” has arrived. I am sure that newly hired defensive line coach Freddie Roach will have no problem doing that.

If Barmore isn’t causing devastation, look for it to come from freshman linebacker Will Anderson. He has been an absolute terror in practices/scrimmages. In back-to-back scrimmages, Anderson posted 10 sacks. Many fans are comparing him to another Alabama legend, Derrick Thomas. That is quite the mantle to place on this young man, but it looks like he has no problem accepting it.

Auburn: It all starts with sophomore quarterback Bo Nix. Coming in as a freshman in 2019, he was met with lofty expectations. However, his output was less than ideal. Although he did have big wins against Oregon in the season opener and Alabama in the Iron Bowl, inconsistency was the phrase that marked his inaugural season. Nix threw for 16 touchdowns passes to just 6 interceptions. However, he hit just 58% of his throws and was under 52% five times.

Now, it’s time for him to ascend from game manger to elite. Not to worry, he will have the aid of two of the SEC’s best wide receivers,Seth Williams and Anthony Schwartz. There are a large group of people who say that Williams has the potential to be an NFL team’s future top target. If he lives up to that belief and one of the fastest men in the game, Schwartz, picks up his production, then look out.

Even though they have weapons, it all starts with dominant offensive line play. Four of last year’s starters are gone, but Nick Brahmsremains. It’s a lot to ask, but this young group needs to mature fast if the Tigers hope to get anything going offensively in 2020.

Troubled back JaTarvious Whitlow has departed for greener pastures via the transfer portal. In his place is former 5-starCartavious Bigsby, who could steal the show. At the high school level, he rushed for 3,857 yards and 49 touchdowns combine in his junior and senior seasons. Add to that, he averaged a whopping 11.4 yards per carry. If that should carry over to the SEC, he may have fans reminiscing of Bo Jackson.

On the defensive side of the ball, the Tigers lost stars Marlon Davis and Derrick Brown to the NFL. So, Gus Malzahn will spend this time trying to reload up front. The cupboard isn’t completely empty though. Markaviest “Big Kat” Bryant turned down the allure of the NFL to return for his final season. Bryant is a dominant pass rusher who can make a play on virtually every down. During the offseason, he spent time with NFL players improving his footwork and hands. With the help of trainers, he even managed to shave a tenth of a second off his speed.

Helping Bryant will be blue collar linebacker KJ Britt. Britt may not be the flashiest in the bunch, but the man just gets the job done. In 2019, he finished with 68 tackles, 10 tackles for a loss, 3.5 sacks, and 2 forced fumbles. He too spent the offseason fine tuning his game and looks to have a stellar senior campaign. Think he’s not motivated? He made this declaration on his Instagram account, “I owe you more Auburn! #SeniorYear #WDE”.

LSU: The Fightin’ Orgerons had one of the most spectacular seasons in college football history. If you didn’t come away impressed, you don’t like football. For their efforts, they snagged a Heisman, their first victory over division rival Alabama in 8 years, an SEC Championship, a National Championship, and several NFL first round draft picks. They led the nation with 569 yards and 48.4 yards per game. There’s a problem though. Joe Burrow…gone. Justin Jefferson…gone. Clyde Edwards-Helaire…gone. Thaddeus Moss…gone. Passing game coordinator Joe Brady…gone. Ja’Marr Chase…opted out. A host of other players departed as well. At least they have friend in Jesus.

Tasked with replacing Joe Burrow is 6’4 Junior quarterback Myles Brennan. The former highly regarded 4-star from Mississippi has been patient, put in the work, studied film, put on 45lbs of muscle, and everything possible to take the lead. Now, he has his chance.

Last season, in limited duty, Brennan threw for 353 yard and a touchdown. He comes in with a tremendous upside. As long as he plays within himself, and realizes he doesn’t have to be Joe Burrow, the rising junior is primed for a good year. He will have help from wide receiver Terrance Marshall (46 receptions 671 yards, 13 touchdowns) and superstar-in-the-making tight end Arik Gilbert.

The offensive side of the ball saw a huge loss of star power. So did the Tigers’ defense. They will be without the services of K’Lavon Chaisson, Patrick Queen, Jacob Phillips, Grant Delpit, and Kristian Fulton. Losing vital components like that definitely hurts, but Coach O isn’t one to make excuses. If anyone will have defense ready, rest assured it will be him.

There is good news. The Bayou Bengal Tigers will have one of the better secondaries in the country headlined by cornerback Derek Stingley and safety JaCoby Stevens. Don’t forget highly-coveted recruit Elias Ricks. He will be the next in line of an endless list of LSU greats at this position. Ricks is very physical, has great instincts, and is very versatile. Those are all the things Coach O likes in a defensive back.

Although, they lost a lot at the linebacker position, the arrival of graduate transfer Jabril Cox has caused Tiger nation to take notice. The former FCS All-American from North Dakota State has big play potential and could be the game-changer Orgeron is looking for. At the inside spot, junior Damone Clark, who many label as a future star, will accompany Cox in making opposing running back’s lives miserable. Defensive coordinator Bo Pelini envisions Clark being a first round pick in the upcoming NFL Draft.

The SEC West is perhaps the best division in football. It goes without saying. Whichever team can survive the gauntlet that is the West more than likely will be in the College Football Playoff. However, before we get to that point, I felt these key factors were something worth looking at when it comes to this season. It is going to be exciting to watch and we get to do so very soon!