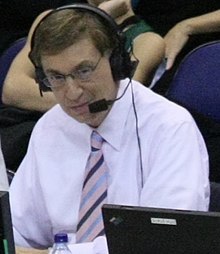 Marv Albert, the play-by-play announcer signs off one final time after 55 years of calling games.

Albert was wrapping up his final call for the network, the Bucks’ clinching victory over the Hawks in Game 6 of the Eastern Conference finals in Atlanta. Reggie Miller, his last analyst, briefly touched on what Albert contributed to the history of the NBA.

“You gifted the game of basketball with your voice,” Miller said.

Albert then got the last word as he signed off for the last time before retirement. He spoke over a photo montage of his 55-year broadcasting career.

“You gifted the game of basketball with your voice.” ✊