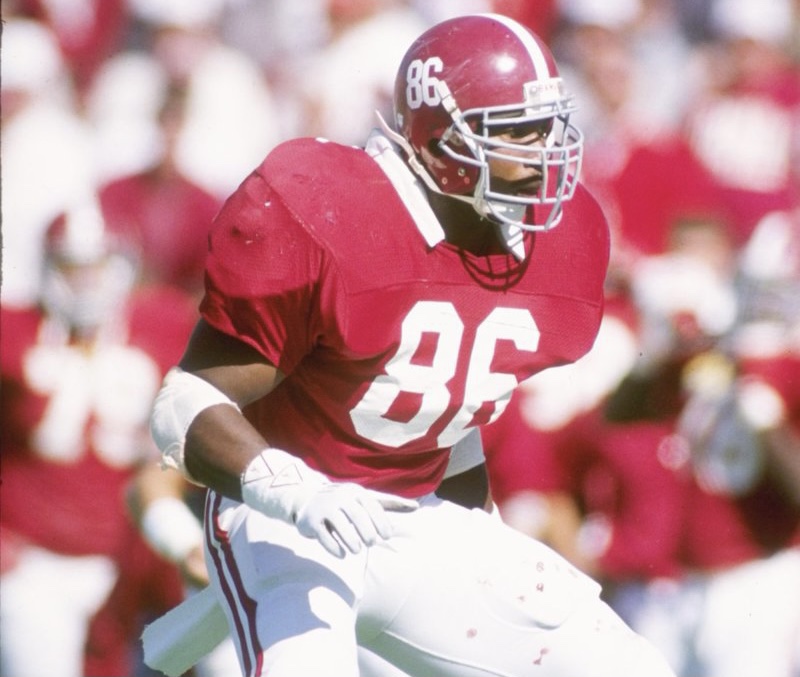 The Crimson Tide community has lost one of it’s greatest players in school history today. Early this morning in his home in St. Petersburg, Alabama legend Keith McCants was found dead. Keith was only 53 years old.

The former NFL star and 1989 Iron Bowl MVP passed away Thursday. He was 53 years old. 🐘🙏 pic.twitter.com/1kWsmprWgf

Pinellas County officers responded to a call made at 5:10 a.m. and pronounced him dead upon arrival. McCants was unresponsive from what appeared to them to be a drug overdose. However, local authorities have launched a full investigation to make a solid confirmation. At this point, it is only speculation.

During his time at the Capstone, Keith McCants established himself was one of the most dominant defensive players in college football. He did this while playing under Coach Bill Curry and alongside Crimson Tide legend, Derrick Thomas. 1989 was his finest year as countless accolades poured in, boasting of his performance. Among those awards were Unanimous First Team All-American selection, Butkus Award runner-up, and National Defensive Player of the Year. He went on to be drafted No. 4 overall by the Tampa Bay Buccaneers in the 1990 NFL Draft.

This past year, I spent some time getting to know Keith McCants. One of those moments was on a podcast conducted on “The Sports Cast”. During the span of an hour, Keith told his story not only on the field, but his struggles off it. He did not shy away from any detail. McCants was very descriptive when confessing to his battles with drugs, homelessness, attempted suicide, depression, etc. He wanted us and listeners to understand his struggle, but also appreciate the victory that would soon be revealed.

Many people, perhaps unfairly, labeled him as an NFL “bust”. What they don’t know is that Keith McCants suffered from a degenerative leg condition. It greatly hindered his play. However, his desire to compete mixed with teams’ front offices demanding excellence led him down a dark road with pain killers. It formed an addiction that opened a door leading to several others.

Drug addiction took over his mind. McCants spoke of times where his abuse manipulated his mind to the point where he didn’t know who he was. Although he had money, because of his condition, he was living on the street and eating out of garbage cans.

However, his troubled path was about to take a different turn. God would step in. After being arrested, Keith sat in his jail cell contemplating suicide. He’d reached his breaking point. Before a suicide attempt, he recalled exclaiming to God, “If you’re real, show me.” After fastening a belt around his neck, he kicked his chair from beneath him. He hung motionless. Then, a miracle happened. The belt suddenly snapped and Keith McCants fell to the ground. God indeed answered his prayer. Shortly thereafter, he committed his life to Christ and walked away from his troubled past

Sometime later, he was leaving church after a service. When walking out the door, he was greeted by autograph seekers. Keith obliged them. As he finished, he told me that a large gentleman approached him. The man asked if he was Keith McCants and he confirmed. The stranger suddenly gave him a hug. This startled Keith. The man pulled back, and spoke, “You may not remember me, but I remember you. I was a guard at the prison you were in the night you tried to commit suicide. I prayed that God would save your life.”

Despite his struggles, Keith was loved by many and reciprocated the same sentiment. He never stopped helping people. I spoke to him several weeks ago to check on how he was doing. In addition, I invited him to be a guest on my new show. He was excited and quickly agreed to my request. Little did I know, it would be the last time that I’d speak to him. With that said, I request two things: 1) Pray for his loved ones. 2) Never take for granted the time you have with anyone. If you rarely talk to loved ones, don’t bypass an opportunity to reach out when the idea pops in your head. The opportunity may not surface again