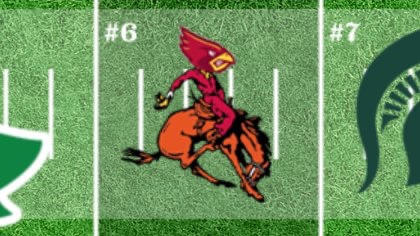 Iowa State used a monster day from wide receiver Xavier Hutchinson to shock No. 8 Oklahoma State 24-21 on Saturday and hand the Cowboys their first loss of the season. Down three points with three minutes remaining, Oklahoma State had one last chance to drive and either tie or win the game. However, Iowa State stood up by stopping OSU receiver Brennan Presley on fourth-and-2 to clinch the game.

Hutchinson managed to get behind Oklahoma State’s outstanding defense all day and cause issues, catching 12 passes for 125 yards and two touchdowns. On one occasion, a long touchdown of his was called back by a controversial excessive celebration penalty, but he scored a touchdown anyway a few plays later.

Running backs Jaylen Warren of Oklahoma State and Breece Hall of Iowa State came into this game among the leading rushers in America, but each were held to 76 yards or fewer as both elite defenses had success stopping the run.

Iowa State hands No. 8 Oklahoma State its first loss of the season 🌪 pic.twitter.com/MnO6gVhFBS

No. 8 Oklahoma State is 7-point underdog at Iowa State, marking 1st time a Top 10-ranked team has been at least TD underdog vs. unranked team since 1998 when unranked USC (-8½) beat No. 9 Notre Dame 10-0 via @EvanHAbrams