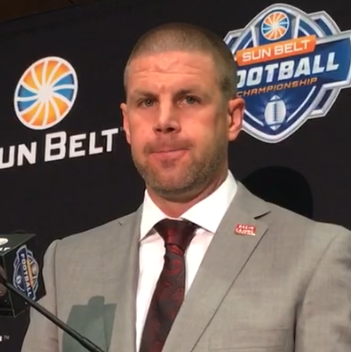 Napier will replace Dan Mullen and become the Gators’ fourth head coach since 2014.

“We are humbled and honored to accept this incredible opportunity,” Napier said in a statement released by UF.

Athletic director Scott Stricklin fired Mullen on Nov. 17 after an overtime loss at Missouri continued the program’s stunning downward spiral during the past 12 months. But the school had decided to move on from Mullen before the Gators’ 24-23 loss to the Tigers and met with Napier the week of the game, a source told The Orlando Sentinel last week.

“He was the only candidate I met with about the job,” Stricklin said in a statement. “Billy’s ability to bring highly-talented people together — players, coaches, and staff — along with his vision for having a strong, relationship-based culture is what made him such an attractive choice. Add in how detailed his plan is for player development, staffing and recruiting, along with a sustained desire to improve, and it’s easy to see why he’s been successful.”

Napier met with his team Sunday to deliver the news a day after the Ragin’ Cajuns won their 11 straight win to finish 11-1, including 8-0 in conference play for the first time. Napier plans to coach during Saturday’s Sun Belt Conference title game against Appalachian State until turning his full attention to resurrecting the Gators, who closed the regular season 6-6 after Saturday’s 24-21 win against Florida State.

NEW: Source inside the Florida athletics program tells me Billy Napier is now the frontrunner for the #Gators and “could reach agreement either today or tomorrow.”@RossDellenger had it first. pic.twitter.com/rXIx1sg6nR