NFL media moving closer to throwing in the towel on Giants

Ed Orgeron will remain as the head coach for the remainder of the season.

The Sky torched the Mercury in their first WNBA Finals game at home this series. 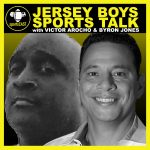 The resignation of head coach Jon Gruden on Monday not only left the Las Vegas Raiders without a head coach but without a play-caller as well. Interim head coach Rich Bisaccia said on Wednesday that offensive coordinator Greg Olson will now handle the play-calling for the Raiders moving forward after Gruden’s departure from the team. [more]

Dallas Cowboys owner Jerry Jones declined to say if he believed former Las Vegas Raiders head coach Jon Gruden should’ve lost his job in the wake of a bombshell report exposing racist, misogynistic and homophobic comments he made in old emails, adding that those in their positions should always be “accountable.”