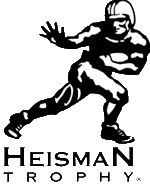 FanDuel released their updated 2019 Heisman trophy odds with Joe Burrow continuing to be the overwhelming favorite to win it.

LSU quarterback Joe Burrow is the -800 leader, up from -700 entering Week 12. In a 58-37 win over Ole Miss, Burrow completed 32 of 42 passes for a career-high 489 yards and five touchdowns – although he did throw two interceptions. It was his first multi-interception game of the season. At one point, Burrow completed a school-record 17 straight passes, and his 3,687 yards passing on the season are a school record. Wideouts Ja’Marr Chase and Justin Jefferson became the second duo in LSU history and the third in SEC history to go over 1,000 yards receiving in the same season.

Here’s the rest of the list, with Jonathan Taylor being the surprise:

One player not in the list is Oregon’s quarterback Justin Herbert, who is having a phenomenal season and is slated to be the number one quarterback to be drafted in next year’s NFL Draft.

Ty Turner from the Sports Cast was not impressed with this list. He said, “The Heisman back in the old days it was a lot more about who actually had the best year as a player” he continued, “Now it’s basically the best player on the best team”

This is just from a sports betting site.

The most recent winner of the Heisman Trophy is former University of Oklahoma quarterback Kyler Murray, who is currently playing professionally with the Arizona Cardinals.