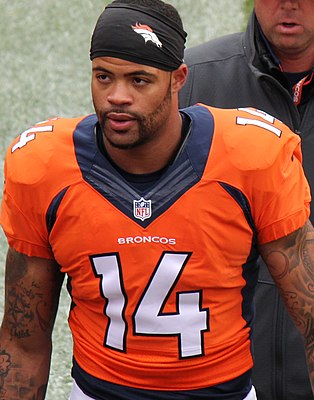 According to a sheriff’s department report, a witness said they heard arguing and what sounded like gunshots inside the apartment. One person was identified as having minor, non-gunshot injuries.

Latimer, 27, was taken into custody and sent to the Douglas County Detention Facility. He has been booked on felony charges of assault in the second degree, menacing and illegal discharge of a firearm and misdemeanor charges of prohibited use of a weapon and reckless endangerment.

Redskins WR Cody Latimer was arrested early this morning and booked on the following charges: Assault in the 2nd Degree, Menacing, Illegal Discharge of a Firearm, Prohibited Use of a Weapon and Reckless Endangerment, per the Douglas County Sheriff. He’s being held on a $25K bond.

Redskins WR Cody Latimer was arrested this morning after shots were reportedly fired inside a Colorado apartment, according to the Douglas County Sheriff's Department.
https://t.co/V5wlpIbK1R

Cody Derek Latimer (born October 10, 1992) is an American football wide receiver for the Washington Redskins of the National Football League (NFL). He was drafted by the Denver Broncos in the second round of the 2014 NFL Draft. He played college football at Indiana. He was a member of the Broncos in their Super Bowl 50 win against the Carolina Panthers, and has also played for the New York Giants. – READ MORE »