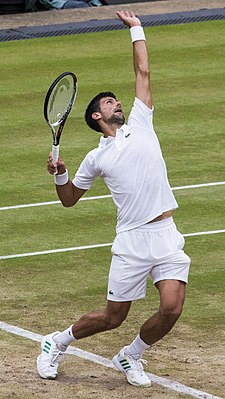 Novak Djokovic says he has tested positive for the coronavirus.

The top-ranked Serb is the fourth player to test positive for the virus after first playing in Belgrade and then again last weekend in Zadar, Croatia.

“The moment we arrived in Belgrade we went to be tested. My result is positive, just as Jelena’s, while the results of our children are negative,” Djokovic said in a statement. “Everything we did in the past month, we did with a pure heart and sincere intentions. Our tournament meant to unite and share a message of solidarity and compassion throughout the region.”

BREAKING: World no.1 Novak Djokovic has tested positive for coronavirus.

Novak Djokovic (Serbian: Новак Ђоковић, romanized: Novak Đoković, pronounced [nôʋaːk dʑôːkoʋitɕ] (listen); born 22 May 1987) is a Serbian professional tennis player who is currently ranked world No. 1 in men’s singles tennis by the Association of Tennis Professionals (ATP).Djokovic has won 17 Grand Slam singles titles, the third-most in history for a male player, five ATP Finals titles, 34 ATP Tour Masters 1000 titles, 14 ATP Tour 500 titles, and has held the No. 1 spot in the ATP rankings for over 280 weeks. In majors, he has won a record eight Australian Open titles, five Wimbledon titles, three US Open titles, and one French Open title. By winning the 2016 French Open, he became the eighth player in history to achieve the Career Grand Slam and the third man to hold all four major titles at once, the first since Rod Laver in 1969 and the first ever to do so on three different surfaces. He is the only male player to have won all nine of the Masters 1000 tournaments. Djokovic was also a member of Serbia’s winning Davis Cup team in 2010 and in the 2020 ATP Cup.
Djokovic is the first Serbian player to be ranked No. 1 by the ATP and the first male player representing Serbia to win a Grand Slam singles title. He is a six-time ITF World Champion and a five-time ATP year-end No. 1 ranked player. Djokovic has won numerous awards, including the Laureus World Sports Award for Sportsman of the Year (four times) and the 2011 BBC Overseas Sports Personality of the Year award. He is also a recipient of the Order of St. Sava, the Order of Karađorđe’s Star, and the Order of the Republika Srpska. – READ MORE »