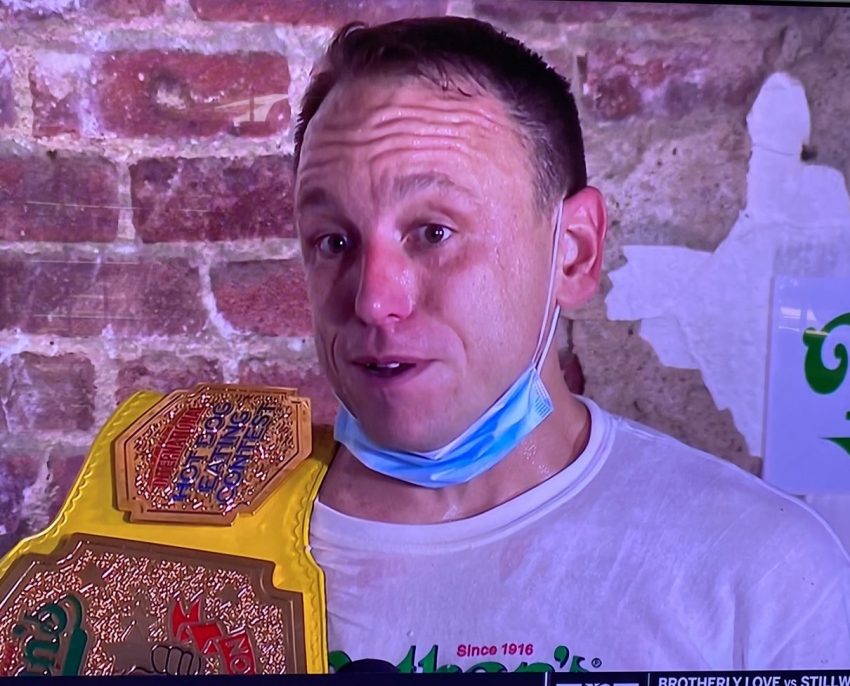 The annual hot dog contest took place at a private New York location with COVID-19 safety measures in place instead of its usual Coney Island boardwalk spot. No fans were in attendance, and competitors were spaced six feet apart while separated by plexiglass.

Chestnut ate the 1,000th hot dog of his competitive eating career with his 62nd frankfurter. “Jaws” fended off Darron Breeden and Nick Wehry, who finished second and third, respectively.

“I knew I was fast in the beginning,” Chestnut said. “I hit a wall (at the end). I really missed the crowd.”

Chestnut, a Kentucky native and San Jose resident, has now won the contest 13 of the last 14 years since taking down six-time defending champion Takeru Kobayashi in 2007. Last year, Chestnut ate 71 hot dogs, falling short of his ’18 record. The 36-year-old ate 72 in 2017 and 70 in 2016. He’s now won five in a row, with his only loss in the last decade against Matt Stonie in 2015’s contest.

On the women’s side, front-runner Miki Sudo also didn’t disappoint, setting a world record on the way to her seventh Mustard Yellow Belt. Sudo downed 48½ frankfurters to beat Sonya Thomas’ record of 45 hot dogs, set in 2012.

He’s now a 13-time Nathan’s Hot Dog Eating Contest champion, the most of all time. pic.twitter.com/Y142Id81wH

75 HOT DOGS AND BUNS for Joey Chestnut, a new world record and 33 more than his closest competitor this year.