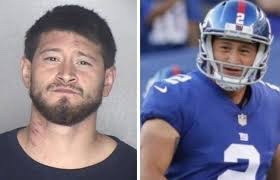 Giants kicker Aldrick Rosas has been charged with reckless driving, hit-and-run property damage and driving with a suspended/revoked license in a June accident.

In 2016, Rosas was found guilty of driving with a blood-alcohol level over .08%, according to Glenn County, California, court records. His next hearing for the current matter is scheduled for Sept. 4.

The Giants are scheduled to open training camp later this month.

Giants kicker Aldrick Rosas was formally charged with three misdemeanors in the Superior Court of California for an alleged high-speed hit-and-run that led to his arrest in June.https://t.co/Nfklu4bZJB