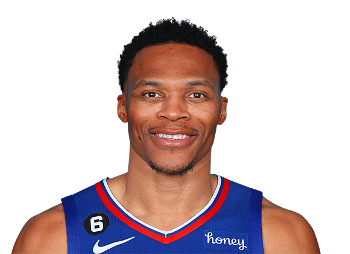 Russell Westbrook, who announced last week that he had tested positive for COVID-19, is OK to return to practice with the Rockets.

Westbrook spoke to the media before Wednesday’s practice, his first with the team since clearing the NBA’s quarantine protocol at the league’s Walt Disney World campus. He arrived in Orlando, Florida, on Monday after twice testing negative.

Westbrook said he was asymptomatic “other than a stuffy nose” and was able to do conditioning workouts during his quarantine at home.

“I’ve been at home, trying to be productive,” said Westbrook, a nine-time All-Star who is averaging 27.5 points, 8.0 rebounds and 7.0 assists per game in his first season with the Rockets. “Obviously, not able to get on the basketball floor, but finding ways to stay active, doing as much conditioning as I can probably do. We’ll see [the conditioning level] when I get out there, but that’s the last thing that I worry about. I’m in pretty good shape, so I should be all right.”

Russell Westbrook greeting Coach Mike D’Antoni after clearing quarantine here in Orlando. Russ will practice with the Rockets this morning. When asked if he willl play in Houston’s scrimmage Friday, he said : “Honestly, I have to see if I can make a layup – let’s start there.” pic.twitter.com/KvwHcIwTi4

Russell Westbrook has cleared the NBA’s quarantine protocol and will practice with the Rockets today, per source.

Russell Westbrook III (born November 12, 1988) is an American professional basketball player for the Houston Rockets of the National Basketball Association (NBA). He is a nine-time NBA All-Star and earned the NBA Most Valuable Player Award for the 2016–17 season. He is also an eight-time All-NBA Team member, led the league in scoring in 2014–15 and 2016–17, and won back-to-back NBA All-Star Game Most Valuable Player awards in 2015 and 2016. In 2017, the year he won the league MVP award, Westbrook became one of two players in NBA history to average a triple-double for a season, along with Oscar Robertson in 1962. He also set a record for the most triple-doubles in a season, with 42. He went on to average a triple-double the following two seasons also, as well as lead the league in assists and become the first player to lead the league in points and assists in multiple seasons. He is currently second all time in career triple-doubles in NBA history.Westbrook played college basketball for the UCLA Bruins and earned third-team all-conference honors in the Pac-10. He was selected with the fourth overall pick in the 2008 NBA draft by the Seattle SuperSonics, who then relocated to Oklahoma City six days later. Westbrook has represented the United States national team twice, winning gold medals in the 2010 FIBA World Championship and the 2012 Olympics. After spending his first 11 seasons with the Thunder he was traded to the Rockets in July 2019. – READ MORE »