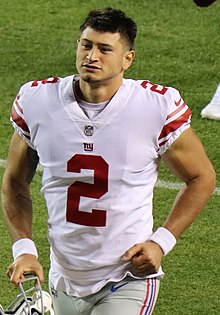 The Giants will release kicker Aldrick Rosas, according to an NFL Network Report Sunday, in the aftermath of his June 16 alcohol-involved hit-and-run incident.

Prior to the incident, the Giants signed Rosas, 25, to a $3.2 million tender to keep him as a restricted free agent. Rosas made the Pro Bowl in 2018 but struggled in 2019, missing five field goals and four extra points.

By releasing Rosas, the Giants free up approximately $3,259,000 in cap space, without absorbing any dead-money.

The #Giants will release K Aldrick Rosas soon, sources tell me and @RapSheet. Rosas was recently charged with three misdemeanors for an alleged hit-and-run accident in June.

The Giants are making a change at kicker, per source. Aldrick Rosas will be released after being charged with three misdemeanors from a hit and run accident last month. #Giants

Aldrick Rosas (born December 30, 1994) is an American football placekicker who is currently a free agent. He was selected to the Pro Bowl for the 2018 NFL season.