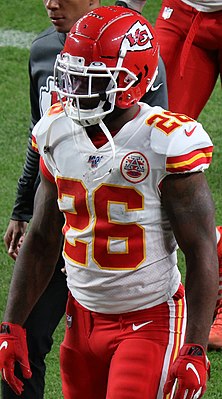 The Chiefs announced on Wednesday that running back Damien Williams has decided to opt out of playing this year. He joins guard Laurent Duvernay-Tardif as Chiefs players who have opted out this season.

“As an organization, we certainly understand and respect Damien’s choice, knowing it was made in the best interest of his family,” Chiefs General Manager Brett Veach said in a statement. “He means a lot to our football team as a player and a person, and we’re going to miss having him around this season.”

Williams was headed into the final year of his contract and was set to make $1.85 million. His contract will toll to the 2021 season and he’ll receive an $150,000 advance on his salary.

“Damien Williams informed the club of his decision to opt out of the 2020 season." pic.twitter.com/dEQ2sUs9u2

The #Chiefs have announced that RB Damien Williams informed the team of his decision to opt out for the 2020 season.

Damien Williams (born April 3, 1992) is an American football running back for the Kansas City Chiefs of the National Football League (NFL). He played college football at Oklahoma. He was signed by the Miami Dolphins as an undrafted free agent in 2014. – READ MORE »