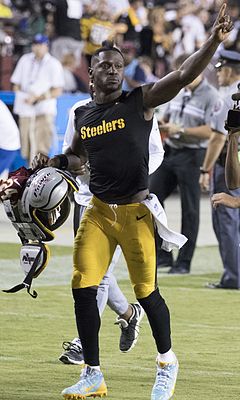 Antonio Brown will officially miss half of the 2020 season. Brown has been suspended eight games by the NFL for multiple violations of the league’s personal-conduct policy.

Antonio Brown recently demanded that the league resolve its investigation into his alleged off-field incidents, and on Friday the NFL responded.

The NFL announced it has suspended the free-agent wide receiver eight games for multiple violations of the league’s personal-conduct policy.

Brown’s suspension stems from his no contest plea to burglary and battery charges from a January incident in Florida, and accusations he sent intimidating texts to a woman who accused the receiver of making past unwanted advances toward her.

Antonio Tavaris Brown Sr. (born July 10, 1988) is an American football wide receiver who is a free agent. Raised in Liberty City, Miami, Brown attended Miami Norland High School, where he competed in both football and track. He played college football at Central Michigan University, where he earned All-American honors in 2008 and 2009 as a punt returner. A sixth-round pick by the Pittsburgh Steelers, Brown amassed more receptions than any other player in the league from his rookie season in 2010 through 2018.During Brown’s first season with the Steelers, the team advanced to Super Bowl XLV but lost to the Green Bay Packers. He finished his rookie season with 16 receptions for 167 yards in ten games. During his second NFL season, he became the first player in NFL history to have more than 1,000 yards receiving and returning in the same year. For his efforts, Brown was selected as a punt returner for the 2012 Pro Bowl. In 2013, he became the only receiver in NFL history to record five receptions and at least 50 yards in every single game of an NFL season. Although his on-the-field productivity continued over the next several seasons, including leading the league in receptions and receiving yards in 2014, receptions in 2015, receiving yards in 2017, and receiving touchdowns in 2018, Brown’s relationship with the Steelers soured, especially with quarterback Ben Roethlisberger, and he eventually requested a trade.In 2019, Brown was traded to the Oakland Raiders, who then made him the highest-paid receiver in the league. However, his time in Oakland was short-lived, and following several off-the-field incidents, including a confrontation with general manager Mike Mayock, the team released Brown without him ever playing a regular-season game. Brown signed with the New England Patriots shortly thereafter but was cut after appearing in just one game. At the time, the NFL was investigating sexual assault allegations made against him.