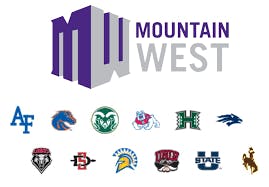 The Mountain West will allow its college football teams to play two nonconference games in addition to the league’s usual slate of eight conference games in the 2020 season. The league announced the plan Wednesday and noted in a statement that the earliest play will begin is Sept. 26. An exact schedule has not been released at this time.

“The MW’s revised fall sports plan will align with the requirements announced today by the NCAA Board of Governors,” read the Mountain West’s statement. “It will also continue to be evaluated in the context of the virus status on member institution campuses and within the respective communities, and will be subject to directives from local, state and federal leaders. Should further modifications become necessary, including delay or cancellation of competition, the MW Board of Directors is prepared to do so.”

The Mountain West Championship Game will be played on one of the first three Saturdays in December, allowing the league flexibility to move the title game based on if the season is delayed by COVID-19 concerns. Among Group of Five schools, the Mountain West’s 10-game approach differs from that of the American and Sun Belt, which have both announced they will allow their teams to play a full 12-game slate if they can schedule enough games.

Mountain West scheduling format officially set with 8 conference + 2 nonconference games, sources told @Stadium. Season to begin no earlier than week of Sept. 26. Championship game will be played either Dec. 5, 12 or 19