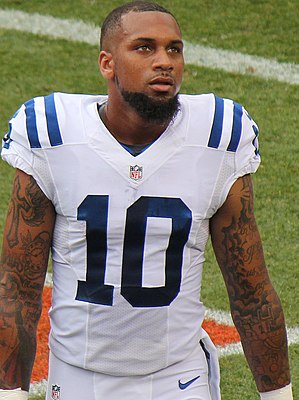 Moncrief, 27, who worked out last week for the Jets, must pass the COVID-19 protocols before he can start practicing with them.

The move, first reported by the NFL Network, is another attempt by the Jets to add experience to a young and injury-plagued receiving corps. They recently signed Chris Hogan, who already is working with the starters.

The current starters are Jamison Crowder and Breshad Perriman, who has missed some practice time due to knee swelling.

Moncrief played college football at Ole Miss, and was drafted by the Indianapolis Colts in the third round of the 2014 NFL Draft.

The #Jets are planning to sign veteran FA WR Donte Moncrief, source said, once he passes through his COVID-19 protocols. The former #Colts starter spent time with the #Panthers and #Steelers last year and recently worked out for NYJ, as well. He’ll provide depth.

The #Jets are signing WR Donte Moncrief, source confirms (as @RapSheet said). He first must pass the COVID-19 protocols.

Donte Rakeem Moncrief (born August 6, 1993) is an American football wide receiver for the New York Jets of the National Football League (NFL). He played college football at Ole Miss, and was drafted by the Indianapolis Colts in the third round of the 2014 NFL Draft.