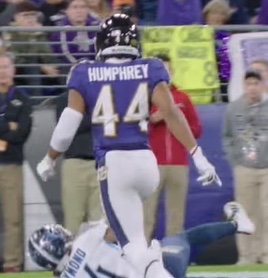 We live in a time where, in the sports world, athletes draw a lot of attention to themselves. By extension, they command the largest salaries. One could even say that they feel entitled to it. It’s hard to argue that fact. It’s evident when we receive breaking news of how a star athlete refuses to play until he is adequately compensated. It’s not so much about committing to a team, being grateful for the platform they hold, or acknowledging those around them who contribute to their on-field success.

Before anyone sounds off on me regarding athletes as a whole, stating not all of them possess this line of thinking, allow me to make my point. You are right. Not all players are that way. One man has shattered that narrative while playing All-Pro ball ever since he arrived in the NFL. That person is none other than Baltimore Ravens All-Pro defensive back Marlon Humphrey.

Ever since entering the NFL, former Alabama Crimson Tide legacy, Marlon Humphrey, has been a force on the field. His humble, blue-collar approach to the game has earned him the respect of not only his teammates, but players and analysts across the entire football landscape. Off the field, Humphrey has never been one to draw attention to himself. On the field, his play does all the talking for him. He has become the premiere cornerback in the NFL. In just 3 seasons since leaving Tuscaloosa, the son of a former Bama and NFL legend, Bobby Humphrey, has amassed 8 interceptions, 150 tackles, 4 forced fumbles, and 2 touchdowns. Now, the Baltimore Ravens are locking in their lockdown defensive back to a 5-year contract extension worth $98.75 million.

So, what does the Pro Bowler do after receiving this monumental contract extension? He broke down in tears. As he cried joyfully, Marlon began to thank those around him in the Baltimore organization. However, most of his touching gratitude was directed towards his father, Bobby. “I really thank him a lot for what he’s done and I know he’ll continue to be a great father to me and hopefully, one day, I get a family I can treat my sons and my daughters the way my dad has treated me and my brothers and sisters, Marlon said.

Humphrey went on to credit his dad’s guidance and direction for his success at every stage in his career. “My dad kept me in line. Since I was young, I told my dad I wanted to play in the NFL and he never really let me slip,” Marlon stated. As he fought back more tears, he continued with, “My dad has been so much more than just a father. He coached me as a kid. He’s actually been my everything for me, along with my mom.”

Marlon Humphrey got choked up while talking about how much his dad meant to him after signing his contract extension with the Ravens 💜 pic.twitter.com/6tCNdUIS8d

What an incredible moment for the young man, but also for all those watching his press conference shortly after inking this massive deal. In a moment where he could have stolen the spotlight for himself, he instead directed it towards his father. He set an example all aspiring amateur athletes should look to. Throughout his career, he has allowed his play to speak for him. Once more, he allowed his play to also demand justifiable compensation for it. Not once did he make it about him. When it was time to receive his reward, he didn’t boast nor did he show any signs of being entitled. Instead, he looked to dad. He looked to Bobby and said, “I owe this to you”. What an amazing moment.