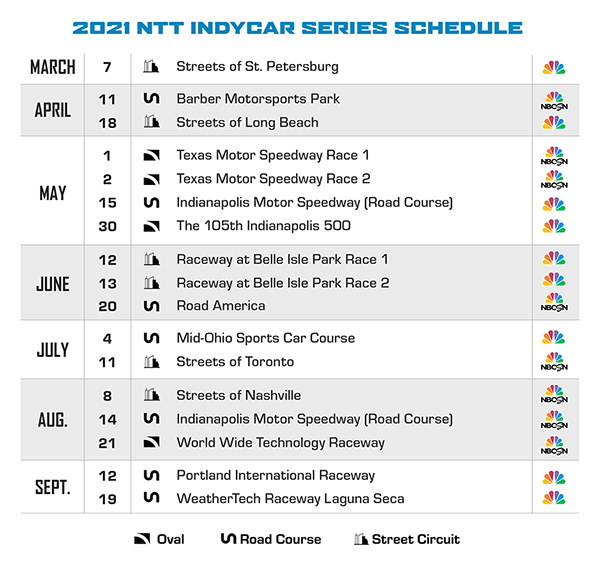 IndyCar announced a 17-race schedule for 2021 on Thursday that includes a stop at Texas Motor Speedway before the Indianapolis 500 for the first time ever.

The 2021 season will begin Sunday, March 7 on the streets of St. Petersburg, Florida.

For the first time, the NTT IndyCar Series will race at the Texas Motor Speedway in the month of May during a doubleheader weekend Saturday, May 1 and Sunday, May 2. The move places an oval on the schedule before the 105th Running of the Indianapolis 500, scheduled for Sunday, May 30.

In August, the series will feature consecutive races on a street course, road course and an oval, beginning with IndyCar’s debut on the on the streets of Nashville, Tennessee, for the first Music City Grand Prix on Sunday, Aug. 8. The three-day event will be staged on a temporary grand prix circuit in downtown Nashville and around the Nissan Stadium campus that serves as the home of the NFL’s Tennessee Titans.

More than half of the events on the schedule have been on the IndyCar calendar for 16 or more years, with Long Beach and Mid-Ohio (36 years) leading legendary visits to Detroit, Road America, Toronto and Portland International Raceway.

The 2021 NTT IndyCar Series champion will be crowned Sunday, Sept. 19 at WeatherTech Raceway Laguna Seca, wrapping up the season on NBC.

2021 event start times will be announced at a later date.