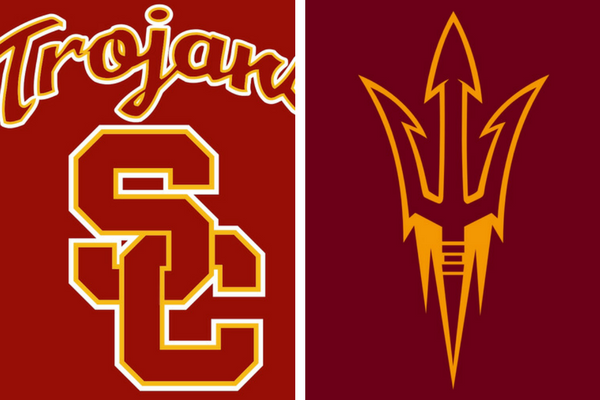 USC vs Arizona State play this weekend which should be an interesting game. Both teams have two of the best quarterbacks in the Pac-12. Kedon Slovis and Jayden Daniels are both returning starters and are expected to show their progress in year 2.

Last season Daniels had a 60.7% completion average. He threw for 2,943 yds and had 17 touchdowns and only 2 interceptions. His biggest strength is his ability to protect the football and make smart decisions under pressure. Clay Helton said “His production as a true freshman was evident both in the passing game and how he creates athletically. But what was more impressive is him not turning the ball over”.

For Kedon Slovis turnovers were a problem for him last season. He threw 9 interceptions, however Slovis had a 71.9% completion average. He also threw for 3,502 yds and had 30 touchdowns last year. In year 2 Slovis should be more mature as a QB, last year he was only 17 and was trying to become a leader on a veteran team.

You can expect to see USC ‘s run game in full effect. Slovis will be throwing dimes to his talented receiver core. Last off-season Slovis put on some weight getting up to 215 the added muscle should help him stay healthy this season. If USC’s offensive line can provide some protection for Slovis this season the Trojans could surprise a lot of people.

Arizona State lost one of their best playmakers WR Brandon Aiyuk. It will be interesting to see if Frank Darby can step up and fill his shoes this year. Darby is a 6’1, 200lbs WR who is looking to become an offensive weapon for the Sun Devils this year. For ASU Jayden Daniels will have to connect with players like Darby in order for his team to be competitive this year.