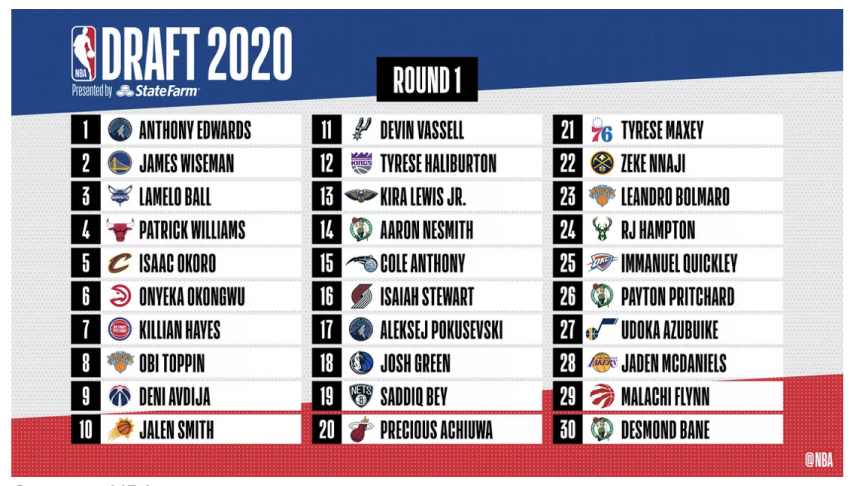 Last night was the NBA Draft and for many young players their dream has come true. With the 1st overall pick the Minnesota Timberwolves picked Anthony Edwards, the Georgia guard already has an NBA body and is a 3-level scorer. The Warriors took James Wiseman with the 2nd overall pick, and many believe he’s the best player in the Draft not Edwards only time will tell who’s the better player between the top 2 picks. The Charlotte Hornets took LaMelo Ball who is probably the best ball handler and passer in the Draft. With the 4th pick Chicago took Patrick Williams who is a 3&D type of player and fills a big need for Chicago.

Cleveland took Issac Okoro with the 5th pick, he’s an athlete wing that can guard multiple positions. With the 6th pick Atlanta took Okongwu who played with the Ball Bothers at Chino Hills, he an athletic power forward who has great rim protection ability and can stretch the floor. The 7th picked belonged to the Pistons and they took Killian Hayes who is an excellent pick and roll guard and crafty finisher around the rim. The Knicks had the 8th pick and of course they Obi Toppin to add to their log jam of big men. Obi is a good though who has a good motor and is a high flyer. With the 9th the Washington Wizards picked Deni Avdija, who is 3&D wing with passing ability of a guard. The Suns had the 10th pick and selected Jalen Smith who many believe is the best rebounder and defender in the Draft he can also stretch the floor shooting 39% from deep in college.