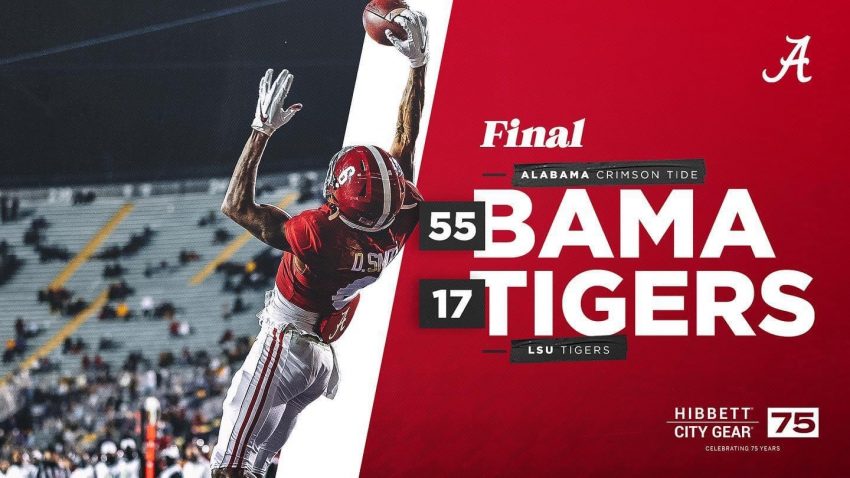 From a national perspective, this contest between conference rivals Alabama and LSU didn’t have the appeal it typically does. After all, the Tigers have been consistent occupants of the struggle bus during the 2020 season. Their record has greatly reflected it. However, to those within the confines of the Alabama nation, it was one of the most anticipated matchups of the season.

After suffering a close home loss to the Fighting Orgeron’s in 2019, Alabama was subjected to asinine antics. Some were from players. However, the most impactful came from their head Coach Ed Orgeron. In the locker room during a post victory celebration, he claimed that they owned Bryant Denny, would kick Alabama’s @$$ each time they played them, kick their hind parts in recruiting, and closed his speech with a hearty “Roll Tide….what…F…. You!”

Alabama TD’s in the 1st Quarter in Baton Rouge tonight. 3

These antics resonated in the minds of Tide players and fans alike for over a year. However, when it was time to put up or shut up with their eccentricities, COVID delayed the Tigers’ originally scheduled meeting with the Tide. The SEC rescheduled the contest to 12/05/2020. After properly disposing of Auburn, the time had finally arrived.

Before the game, Stephen M. Smith of Touchdown Alabama Magazine stated this on a recent episode of “The Riley & Constant Show w/Steve Brown”: “Ed Orgeron wrote a check that he knows he can’t cash. Bama is about to cash this check in a blood bath type way”. His prophetic words would ring true on the first drive for Alabama. Najee Harris scored on a 14-yard run, capping off a 7 play, 75-yard drive.

LSU did show some fight on the ensuing possession by marching the ball down the field 60 yards. However, on a 4th and short, Christian Harris stopped the promising Tiger drive from advancing. This resulted in the ball being turned over to an already hot Alabama offense. The Tide would capitalize on LSU’s misfortune with a 5 play, 85-yard touchdown drive. Najee Harris scored on a 1-yard run. The Bama defense forced LSU to punt on the next possession. For their efforts, Mac Jones and company scored yet again in only 5 plays. Jahleel Billingsley provided the cherry on top to that successful drive with a 24-yard touchdown reception. As a matter of fact, he displayed perfect COVID prevention protocol by properly social distancing himself from the LSU secondary. The sophomore was so gracious in providing that demonstration.

Although Ed’s crew made some noise with a few touchdowns, they proved to be no match for a revenge-minded Saban-led squad. Devonta Smith would torch the Tigers to the the tune of 231 yards and 3 touchdowns on just 8 receptions. SEC and national rushing touchdown leader Najee Harris added 145 yards and 3 touchdowns on 21 carries. After that, Nick Saban’s crew showed some mercy by calling the dogs. That is something his pompous counterpart would never have done. Someone had to be the better/classy man. That eliminated Orgeron from the conversation. So, Nick Saban graciously took on that role.

7 of those losses have come against Nick Saban-coached Alabama teams.

Alabama finished the game winning 55–17. It could have been a lot worse. They gained 650 yards of total, revenge-minded offense. Of those 650 yards, Mac Jones accounted for 385 of them with 4 touchdowns. There could have been a lot more, but Coach Saban decided to follow the teachings of Bear Bryant instead by showing “a little class”.

The game may be over in dominating fashion, but how it as won will forever resonate in the minds of Tide players and fans alike. While Coach O and his Cajun disciples my be silenced for now, Alabama still has work to do against the Hogs and Gators. It leaves little time for celebration. However, during the brief moment in between, we will thoroughly enjoy what was accomplished tonight. For LSU, maybe just maybe, they’ll quit writing checks they’re not good for.

Alabama gets revenge in Baton Rouge vs. LSU 55-17

What are your thoughts on Bama’s dominating performance? pic.twitter.com/UzXHY8LuY0