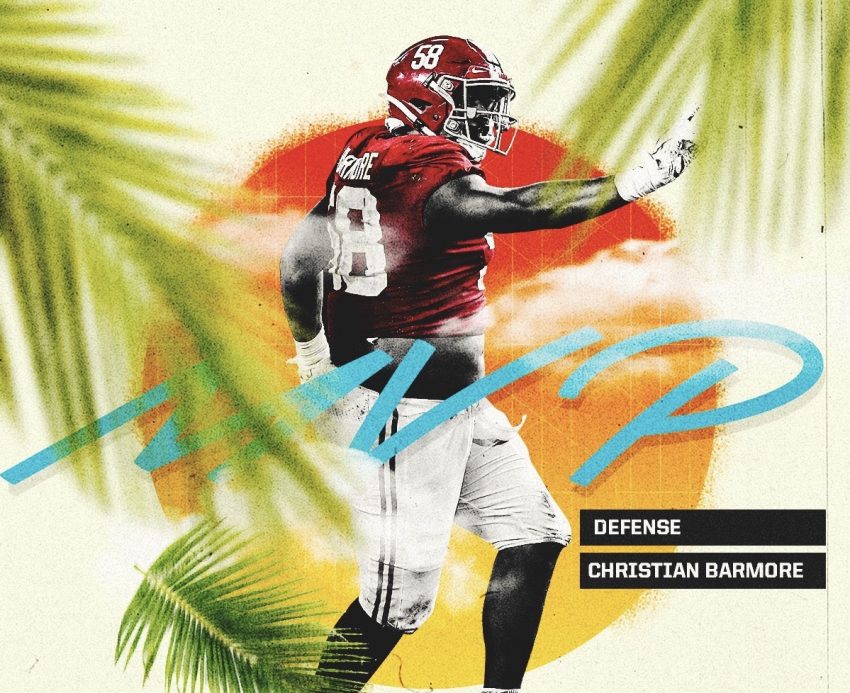 The turnstile at Bryant Denny Stadium has been activated yet again. Just as expected, more underclassmen from the Alabama Crimson Tide have announced their intentions to join the NFL ranks. Those foregoing their remaining year of eligibility are Mac Jones, Christian Barmore, Jaylen Waddle, and Patrick Surtain II. It should come as no surprise to Tide fans that these gentleman, who were key components in Bama’s title run, would opt to pursue their dreams of playing in the pros. That reality was on center stage at their recent press conference.

According to NFL Draft analysts Todd McShay and Mel Kiper Jr, all 4 draft hopefuls are slated to be drafted in the first round along with their other teammates Najee Harris and Devonta Smith. So, their business decision is highly justified. If all six are indeed selected, it would tie a record previously set by Miami in 2004. However, it is my opinion that the Tide could possibly land as many as 7 or 8 due to incredible performances by Alex Leatherwood and fan favorite Landon Dickerson. We could see yet another record broken by this year’s version of the Crimson Tide.

Days before the National Championship, Kiper speculated that Mac Jones could possibly land somewhere in the middle of the opening round, perhaps with the New England Patriots. This theory to many isn’t far-fetched due to the Saban-Belichick connection. Such a high selection would be a well-deserved achievement by the redshirt junior from Jacksonville. Entering this season, Mac was met with many doubters about his future success with the team. Some suggested that newcomer Bryce Young would take the reins. Instead, Jones had one of the most prolific seasons not only in Alabama history, but college football history as well. In 2020, he threw for 4,500 yards, 41 touchdowns, and completed 77% of his throws. Those accolades earned him Davey O’Brien Award, Johnny Unitas Golden Arm Award, and a 3rdplace finish in the Heisman Trophy voting.

I did mention above that Tide fans expected these young men to depart, but I’d be lying if I said that somewhere in the back of their minds, they expected Christian Barmore to return. Any faint hope was squashed moments ago. How could you blame the man? He was an absolute monster this season. The native of Philadelphia had the best season of his Alabama career in 2020 with 37 total tackles, 22 solo stops, 9.5 tackles for loss, eight sacks, three passes defended, and three forced fumbles. Some of those stats were accomplished in the national championship this past Tuesday. The result of which may cause high profile quarterback Justin Fields to have PTSD. “He makes a big impact, just to have a guy like him who wreaks havoc and makes big plays,” defensive end LaBryan Ray said of Barmore.

Although the usual mass exodus of NFL Draft hopefuls occurred yet again, Bama nation has received some good news this week. Linebacker Chris Allen announced that he will be returning for his senior season. With him is defensive lineman Phidarian Mathis. Both were very consistent this season in ruining the plans of offensive coordinators across the landscape of football. The news doesn’t stop there. It is expected that defensive back Josh Jobe and running back Brian Robinson Jr will remain in crimson and white uniforms for a curtain call. These key players will be a good reason why the Tide can continue to remain atop the rankings in 2021.