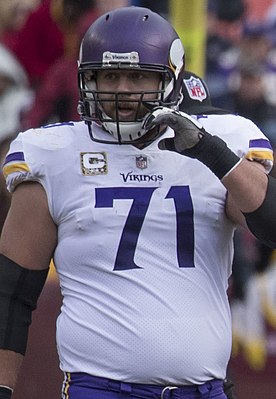 Entering his 10th season in 2021, Reiff has mainly played left tackle in his career, though he’s spent time at right tackle on occasion during his time with the Detroit Lions (2012-16) and Minnesota Vikings (2017-20).

This past season, the 32-year-old Reiff recorded a 71.4 PFF grade while playing 15 games at left tackle. Given his age, he was never going to get a major long-term deal this offseason, making it easy for a team like the Bengals to sign him while not risking their future.

The will help out Joe Burrow up front.

Reiff played college football at Iowa and was drafted by the Detroit Lions in the first round, 23rd overall of the 2012 NFL Draft. He previously played for the Lions from 2012 to 2016 and the Minnesota Vikings from 2017 to 2020.

Another free agent visit: The #Bengals are getting a visit from FA OT Riley Reiff, source said, as the ex-#Vikings starter could become one of the new bodyguards for Joe Burrow.

One of the most important moves in free agency for Cincy: Improve the protection for QB Joe Burrow. A veteran starting LT does that. The #Vikings loved Riley Reiff, on the field and in the locker room. Now, he lands with the #Bengals. https://t.co/SoSBjW6twF