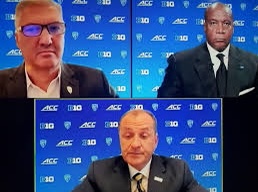 The ACC, Big Ten and Pac-12 have formally announced an alliance days after reports surfaced the conferences would do so. The leagues released a joint statement on Tuesday detailing what the alliance means.

The alliance will focus on a shared vision for the future governance of college athletics. The alliance will mean the three leagues can, among other things, form a voting block that will halt the growing influence of the SEC, which just expanded last month by adding Oklahoma and Texas.

“The alliance – which was unanimously supported by the presidents, chancellors and athletics directors at all 41 institutions – will be guided in all cases by a commitment to, and prioritization of, supporting student-athlete well-being, academic and athletic opportunities, experiences and diverse educational programming. The three conferences are grounded in their support of broad-based athletic programs, the collegiate model and opportunities for student-athletes as part of the educational missions of the institutions.”

Under this plan, the Big Ten would drop from nine to eight conference games, dropping down from three crossover games to two. ACC teams, which already play eight league games, would drop pick up a Big Ten or Pac-12 opponent annually.

The Pac-12 would consider dropping down from nine to eight conference games. Any Big Ten or Pac-12 member that already has a series with Notre Dame would be able to count that game for their ACC matchup.