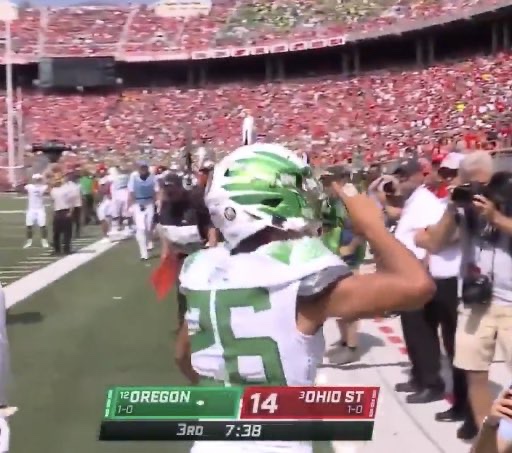 The 2021 college football season has been filled with upsets but perhaps none as surprising as No. 12 Oregon taking down No. 3 Ohio State 35-28 in Ohio Stadium on Saturday, handing the Buckeyes their first home loss since 2017. The shocking upset came after it was learned shortly before kickoff that the Ducks defense would be without star defensive end Kayvon Thibodeaux and linebacker Justin Flowe.

The Oregon offense did a phenomenal job of keeping the Buckeyes off-balance and taking what was given to it. Ducks quarterback Anthony Brown threw for 236 yards and two touchdowns, while running back C.J. Verdell feasted on the ground and in the air. Verdell finished with 161 yards rushing and 34 yards receiving with three total touchdowns..

Ducks win! No. 12 @oregonfootball upsets the No. 3 Ohio State Buckeyes on the road in Columbus, 35-28. #GoDucks pic.twitter.com/3B3f9pXsa9