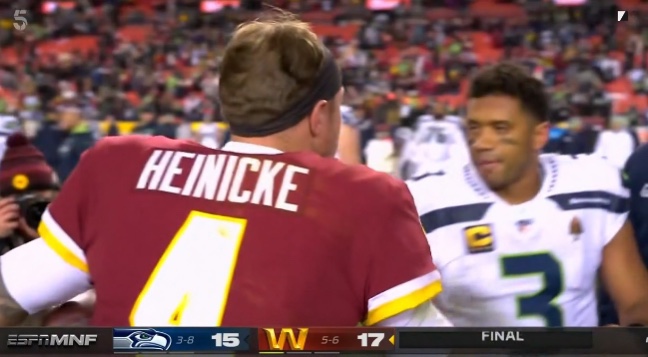 Russell Wilson did not look much like himself in his first two games back from injury. On Monday night, with perhaps his last real chance to revive the Seahawks’ dwindling playoff hopes in prime time, he looked just as bad, if not worse until his final drive. Desperate to snap a two-game slide, the former MVP candidate stumbled all over FedExField before a last-gasp comeback effort to close Week 12, with Washington Football Team riding a tough defensive performance — at one point forcing five consecutive three-and-outs — and some steady-handed quarterbacking from Taylor Heinicke to its third straight win. Monday’s 17-15 victory drops Seattle to 3-8 and catapults Washington back into the Wild Card picture.

Final minutes of MNF were WILD 😳

– Washington goes for it on 4th & goal due to an injured kicker but can’t convert
– Russ throws a TD to pull within 2
– Washington intercepts the 2-point attempt
– Seahawks recover an onside kick but it’s called back for illegal formation pic.twitter.com/E2pk2ZvMcL