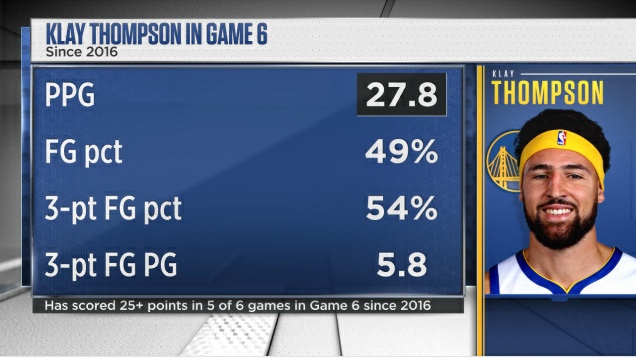 Klay Thompson knocked down eight 3-pointers on the way to 30 points, Stephen Curry scored 29 with six 3s, and the Warriors eliminated the Memphis Grizzlies with a 110-96 win in Game 6 on Friday night.

A trip to the Western Conference finals is next, and coach Steve Kerr should be healthy from his bout with COVID-19.

“Honestly, especially the perspective I’ve gained from the injuries I’ve had, to now be able to compete at highest level and be one of the final four teams, it’s a feeling that’s hard to describe honestly,” Thompson said. “It’s truly amazing and it just inspires me to keep going because I think we still have great basketball ahead of me.”

The Warriors handle the Grizzlies in six games to advance to the WCF‼️ pic.twitter.com/rD4wI8K31f

The Warriors had 70 rebounds tonight to close out the Grizzlies. That’s an NBA high for rebounds by any team in any game this season. Kevon Looney had 21, Draymond Green had 15, Andrew Wiggins had 11. They had 45 defensive rebounds and 25 offensive rebounds. Wild.