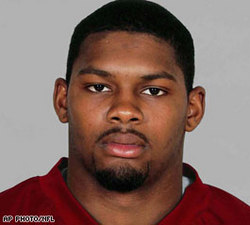 The 24-year-old Redskins safety was murdered in his home by armed robbers in 2007, prompting an outpouring of love and support for the young talent and his family. The internet is remembering him in a big way that is trending on Twitter.

Taylor was drafted by the Redskins with the fifth overall pick of the 2004 NFL Draft where he played for four seasons until his death in 2007.