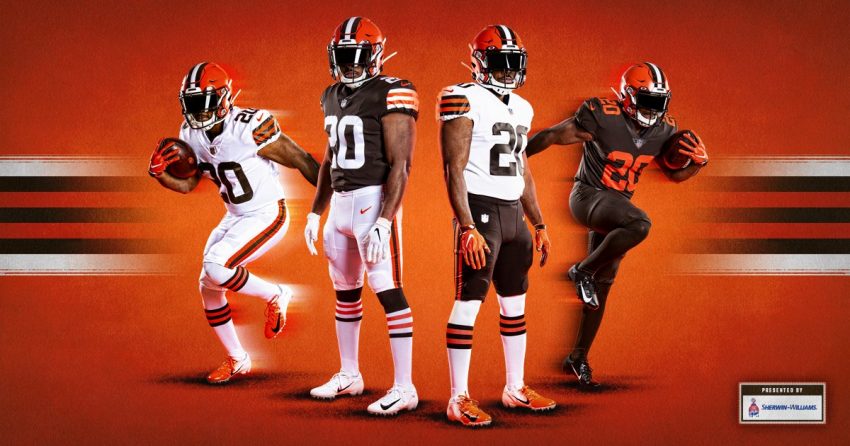 The Cleveland Browns reveal their new uniforms today that look more like what they have worn for much of their history, and not like the radical design in which they finished the 2010s. The last uniform change was is 2015.

The Browns’ new look isn’t simply shifting to traditional block numbers. Similar to how the Colts changed their numbers in an announcement earlier this week, the Browns are using a modernized version of block numbers, with some parts of the numbers looking like traditional blocks, while curved edges replace parts of the number elsewhere. It’s a refreshing take on a traditional uniform element used across all levels of football.

The Browns’ white pants return to their pre-2015 appearance, moving back to the team’s traditional three stripes down each side of the pants with a pattern of orange-brown-orange. Cleveland is also carrying over the team’s brown pants from its color rush uniform, which became its primary home set in 2019.

The orange jersey is no more, likely to the dismay of some fans who were proponents of the team’s alternate top that was occasionally worn in the early 2000s and was also included as a third option in the club’s 2015 rebrand, but orange is best used as an accent, not a primary color. There will be an alternate, though, as the Browns introduced a color rush-like third uniform that is monochromatic brown and is a simplified version of the team’s former color rush option first worn in 2018.

The city’s name across the chest is also gone, removing an element some considered to be collegiate, but we cannot overlook its trend-setting impact on the league. Since the Browns became the first team to wear their city’s name on their chest in 2015, two teams have adopted the approach. The New York Jets introduced uniforms last year that include “New York” across the chest, while the Falcons recently revealed new uniforms with an ATL acronym for the city of Atlanta.