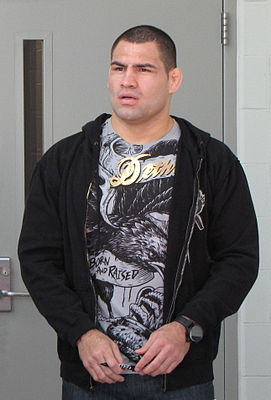 WWE reportedly parted ways with former UFC Heavyweight champion Cain Velasquez as part of a wave of releases and furloughs this month, according to Dave Meltzer of Wrestling Observer Radio.

Velasquez made his WWE debut on the first episode of SmackDown to air on Fox in October, interrupting Brock Lesnar after he beat Kofi Kingston for the WWE Championship. After making a few more appearances, Velasquez lost a short match to Lesnar by submission at WWE Crown Jewel later that month and hasn’t been seen since.

The 37-year-old Velasquez is best known for being a two-time UFC Heavyweight champion with his first title win coming against Lesnar at UFC 121 in 2010.

After losing to Francis Ngannou in February 2019, Velasquez decided to make the transition to professional wrestling. It began with AAA where he competed in a pair of trios matches under a mask, including a win at TripleMania XXVII with Psycho Clown and Cody as his partners.

Before officially joining WWE, Velasquez said in September that he was speaking to both WWE and AEW about potentially signing. ESPN’s Marc Raimondi reported in October that Velasquez signed a “lucrative, multiyear” contract with WWE.

After Lesnar beat Velasquez so decisively at Crown Jewel, however, questions arose regarding whether WWE viewed him as a top draw given his limited wrestling experience and lack of big-time charisma on the mic.

A knee injury may have had something to do with the decision to put Lesnar over cleanly and quickly at Crown Jewel, but Wrestling Inc reported in February that Velasquez underwent a successful knee scope and was working out at the WWE Performance Center in Orlando, Florida, while awaiting his next match.