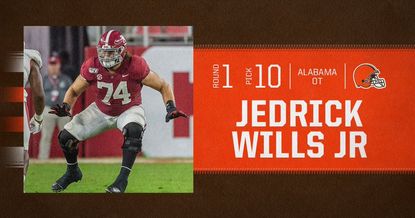 When a player commits to Nick Saban out of high school, he does so with the expectation that his decision will one day lead to the NFL. Another expectation has become reality. On Tuesday, July 7th, former Alabama offensive tackle Jedrick Wills Jr. received finality to his dream of becoming an NFL star. After being drafted tenth overall by the Cleveland Browns in the 2020 NFL Draft, the organization finally put pen to paper. According to his agent, Nicole Lynn, Wills officially signed a contract said to be a worth $19.7 million for 4 years. In addition, that money is guaranteed and includes an $11.8 million signing bonus.

During his 3 years at the Capstone, Jedrick Wills was a component to the success that is the Alabama offensive machine. Adopting an “Incredible Hulk-like” mentality, he smashed his way through defenders on every snap. Wills devastating abilities left few survivors. This helped clear lanes for current NFL running backs Josh Jacobs and Damien Harris on a frequent basis. He rarely showed signs of mercy because he knew the investments he was protecting; especially Tua Tagovailoa.

When he arrived on campus as a freshman, Jedrick saw action in 11 games as a reserve. During his sophomore campaign, he took over as starter for 15 games. In that span of games, Jedrick only allowed 1 sack. Wills finished his career with the Crimson Tide having 28 consecutive starts and 2nd team All-American honors. The rest, as we say, is history.

Signing Jack Conklin to the fold in the off season along with the addition of Jedrick Wills Jr shows the Browns made the offensive line their top priority. This was huge considering Cleveland’s tackles graded at 57.5 overall in 2019. That feat positioned them at pitiful ranking of 30th in the NFL, just ahead of the Dolphins and Chargers. In order for former No. 1 overall draft pick Baker Mayfield to have any shot at becoming elite, it will have to start up front. He’s surrounded by a plethora of weapons. However, if he’s constantly being planted into the dirt, those weapons suddenly become irrelevant. With the signing of Conklin and Wills Jr, it looks as though the problem has been solved.