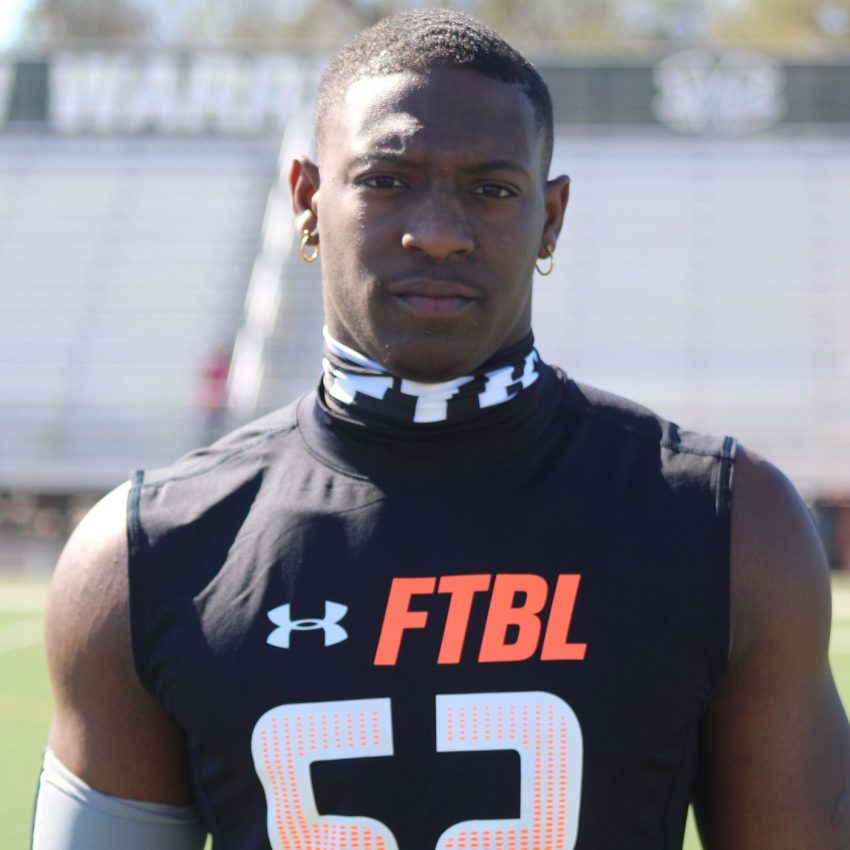 In this episode, Stephen Smith from Touchdown Alabama joins us to give us an update on Alabama’s Recruiting 2021 Class

Tune for more news this weekend!

Santiago Leon 0:17
Sports cast July 17 2020 if you haven’t yet subscribed to all our channels YouTube, Periscope and iTunes and if you’re an iTunes, please leave a rating and review. It will help us out tremendously. And of course, visit us on sports cast dotnet the sports cast net for the latest and greatest when it comes to sports news. This episode is brought to you by is the Bible app you could download the Insta Bible app on the iOS App Store. A lot of recruiting news even during a pandemic year. Bama recruited a few players this week. And more news coming this week and join us too. fleshes out Steven Smith all the way from touchdown Alabama magazine. Welcome back to the sports cast.

How you been Steven?

Stephen, I don’t know if your reception is bad for you. Can you stand somewhere that you think you might get better reception? Maybe now Yeah, that’s fine a little bit better. So today the twins, the Brock Meyer twins have decided they’re going to Alabama. They’re from Texas. Can you tell us a little bit about themselves.

Stephen M. Smith 2:00
Both guys, James and Tommy brought the buyer James Brock Meyer is the four star offensive guard. According to our own Justin Smith who does recruiting for TDA Academy is the five star offensive tackle. Both guys are the Texas record fan magazine, how the father like rock bottom plate for the University of Texas. He was a first round draft pick in the National Football League and his family a stronger football pedigree and one point in time, I know Alabama fans thought it would be just a dream to get either one of the two but to get both in the same class, won a four star all face of God and also play center as well. And the other one is five star off tackle. I mean the fan base giddy with glee right now for the Texas legacy away from wide Tom Harmon, the coach of the Longhorns at this point how

Stephen M. Smith 3:09
every day to three times a day, the offensive line coach cow was on top of the running backs coach Charles hop was a coach said even mentioned the moment that global pandemic hit back in March was canceled collegiate athletics one now he told his coaching staff guys, we’re going to go back to what made Alabama the program that’s because it’s old school recruiting. We’re going to be fostering these relationships with these young media and their families. Talking on our program, what makes our programs on stand down the beauty of this program just sending these young families why coming to Alabama you know is is a big deal and what sets us apart and just know seeing a cop save and take advantage of Good.

Santiago Leon 4:09
James Brock Meyer is 632 hundred and 73 pounds he which was Steven said he’s a four star which is pretty good. And of course Tommy Brock Meyer as well. A their father was an all American offensive o line from Texas in 1994. So they’re definitely well known in the football community. Another big news this week for Alabama was the got linebacker Kendrick black Shire. Steven, what do you know? What do you know with this news?

Stephen M. Smith 4:45
Well, Kevin Blackshear. I mean, this dude’s got a four star pumping you know, non backer out of dunk and go tank type excuse me doc into high school. So this was right up the app. Hey, Jeff banks and Obama’s hiding Coaching special teams coordinator that Texas area in his area, his region of recruiting, and we did look at Black shears tight just his ability to shoot gaps. You know hit guy kind of reminds you a bit of rueben foster when he played at alabama football was just a heat seeking missile. There were times he would not wrap up properly to make the tackle. He just loves to go in his way and knock you backwards. So a guy in Blackshear he’s gonna have to get that coaching to you know wrap up bring your arms bring your legs with you when you tackle but a guy that is a monster in terms of knife in his way in the backfield just created just

Santiago Leon 5:43
another player from Texas Of course and you know, black share, you know this is for the 2021 class as well for the twins as well. So, so far. How’s the 2021 class looking so far?

Stephen M. Smith 5:57
After a slow start here at Leon It has really picked up Alabama now 12 or 12 to 13 verbal commitments here in this class and quite a number of them from the state of Florida as Alabama coach say they continue to hit the Florida pipeline pretty hard with your thoughts you know you’ve got to I’ve got you got three five stars excuse me in a job all wide receiver it JC right up on the offensive line. Of course now Tommy Brock Meyer, you’ve got a slew of four stars in here as well. So it goes back to even with the global pandemic we’re in right now mix Dave and his coaching staff down and said guys, we’re going to get back to fostering these relationships with these young athletes and with their families and having them comfortable with Alabama is the spot for them and you got to give Coach Saban as well as the staff. Tremendous kudos for really setting the program for 2021

Stephen M. Smith 7:07
Well, right now I know most importantly, Justin Smith does a great job on the recruiting trail he was telling me about this weekend, the Sunday actually, five star defensive back to Quincy McKinstry picked them out of Princeton Valley High School here in Alabama declaim shock deal area. He’s supposed to be dropping a top three list of who his top three schools will be. Now I know Alabama and Auburn are huge his commitment to third school that’s going to be interesting like that, whether it’s Clemson, Georgia, Ohio State, no one quite knows just yet who that third school is pushing for on McKinstry his commitment but to Quincy McKinstry is dropping his top three minutes on Sunday in terms of his recruitment the five star defensive backs For the 2021

Santiago Leon 8:02
and you could keep an eye on that if they go to Td alabama.com. Right. What’s the website again?

Santiago Leon 8:13
And one last thing, Steve, what have you heard about the SEC season? What are people telling you? With the schedule.

Stephen M. Smith 8:23
Well, right now I know Greg sang FCC Commissioner Jackson met on Monday with you all for today. Right now. full schedule. I have not made any moves in terms of doing what the PAC 12 and the big 10 in the ACC have done which moved to a conference only look, there are a lot cheaper than that as an option but right now, sec. Steel must be behind a full schedule sometime by make this month. push comes to shove early next month. We can see it Made from Sankey from the SEC about the schedule moving forward, but I’ll keep my finger on the lake this month, the week of July 27.

Santiago Leon 9:12
So you like when you say full schedule? You mean like outside conference games as well? Wow, that is a bold move by the SEC. Don’t you agree?

Stephen M. Smith 9:26
It is. It’s a bold move going back to saying he mentioned was with the ACC the big key and the PAC 12 making the moves they made going to conference only look, how does that affect the SEC and like you said, well, it does minimal, if not any damage to us here. And now remember when the Ivy League decided to move football from from Capitol football potentially moving to the screen that does not say thank you in that regard. Awesome. So as you see, it was trying to figure out always possible to have a full season. Now, if it has to go to a conference only look, then once again, we can get that news bottom portion of this month. I’ll look at the week of July 27. To get that news for right now, the conference holding out

Santiago Leon 10:22
will definitely keep you informed. And hopefully Steven will give us a heads up when that news will come. And do you think it’ll be? Do you think there’ll be some fans in the stadium?

Stephen M. Smith 10:32
That’s the biggest question we all could use right now. with everybody so concerned about public health and public safety offer everybody you see maybe some people couple of people but I wouldn’t put it out and put it too much.

Santiago Leon 10:48
something to definitely look at Of course you’re in the sports cast. We’re hard followers with college football and also recruiting and Steven Smith knows the inside with alabama football and what is happening, Steven, what is the best way to For people to reach you to talk to you about the SEC.

Stephen M. Smith 11:05
Oh absolutely they could reach me on twitter here I’m at coaching m Smith on twitter at coaching m Smith on Twitter or you can by no all of all doing that our own Justin Smith all recruiting analysts for TDA has been doing a lot with the rest of the staff on that can be found to be found at touchdown alabama.com that is touchdown alabama.com and you can follow on Twitter side at TD Alabama Matt as well.

Santiago Leon 11:35
I do agree you guys do break stories first and 247 Sports usually.

Stephen M. Smith 11:42
I mean, we we try to get the news as quickly as accurately as source down as possible the best that we can and we just enjoy giving the fans you know, good quality information on Bama football.

Santiago Leon 11:55
And Steven, what a question of the day what is your favorite emoji.

Santiago Leon 12:15
That’s a good one when Alabama wins right or it’s got a great touchdown.

Santiago Leon 12:26
That’s a good one. Oh wow. Right now in our poll the goat is winning 42% second place is a thumbs up and and third is hands up and the poop emoji is at zero still. Well anyways, this is the sports cast I naked fall was for delays and grades when it comes to Alabama and college football and of course on twitter at the sports cast one, Steve Smith. Thanks for coming on.

Stephen M. Smith 13:01
As always appreciate you guys stay safe out there.