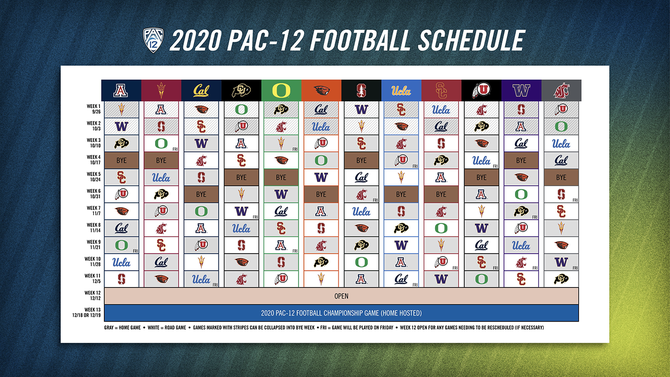 Given the delayed start to the Pac-12 season, the conference championship game has been pushed back two weeks from its original date and will be played on either Friday, Dec. 18 or Saturday, Dec. 19. Schools were also given the option to delay the start of the season by one week. Games that are unable to be played on their scheduled date can be made up in their bye weeks or on Dec. 12.

The Pac-12 was one of the first leagues to announce that it was moving to a conference-only schedule, following the Big Ten’s lead earlier in July. The reduction in number of regular-season games from 12 to 10 is a result of ongoing concerns with the coronavirus pandemic and feasibility of playing an entire season.

Sources: Pac-12 plans to start with aggressive scheduling — USC vs. UCLA, ASU vs Arizona and Washington vs Stanford planned for Week 1 on Sept 26. https://t.co/7t82KS8KWe