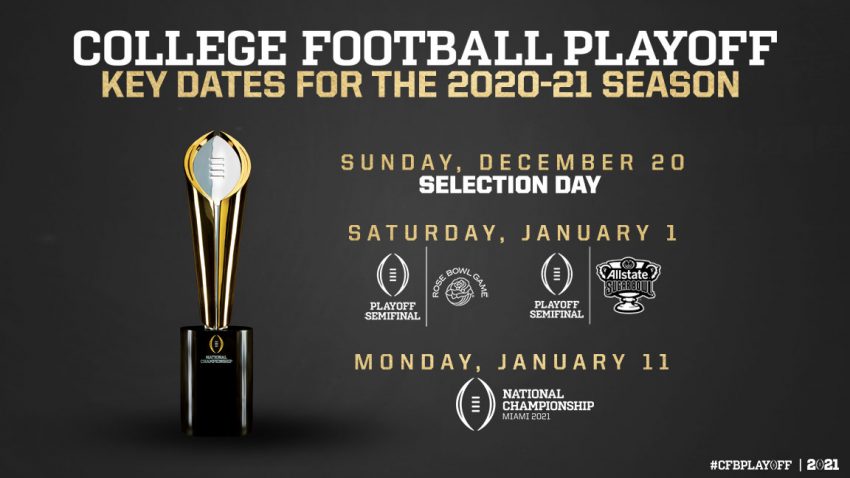 The final rankings were originally scheduled to be released Sunday, December 6. The CFP Management Committee made the change as a result of several conferences having moved their championship games to December 12, 18 or 19.

The committee’s final meeting of the season will be December 18-19-20 in Grapevine, Texas. The CFP will announce the full schedule of this fall’s selection committee meetings at a later date.

“With recent schedule changes for the regular season, it makes sense for the committee to make its final rankings after the conference championship games, when it can get a complete picture of the season,” Hancock said. “The selection committee members understand the need to be flexible as we all navigate uncharted waters this season, and this move will allow them to evaluate all the available information.”

The Management Committee also shortened the post-season travel time for teams. The two teams participating in the CFP National Championship will arrive in Miami on Saturday afternoon, January 9, 2021 instead of the usual Friday evening arrival. With this change, media day, typically held on Saturday morning in the host city, will not take place this year. Details on virtual media availabilities will be announced at a later date. The Rose Bowl Game, Sugar Bowl, Cotton Bowl, Fiesta Bowl, Orange Bowl and Peach Bowl will follow a similar three-day schedule.

“In this unprecedented time, the Management Committee believes it is in the best interest for the health and safety of the student-athletes, coaches and staffs to complete their game-week preparation on campus, under the familiar protocols they will have used all season,” said Hancock. “This is an unfortunate consequence of the pandemic, but it is the right thing to do.”