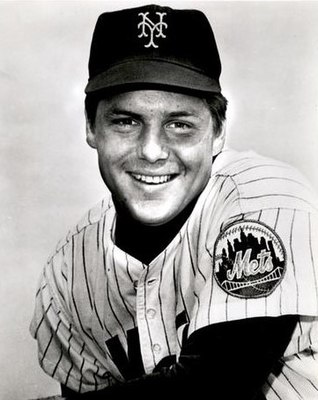 The man called “Tom Terrific” and “The Franchise” has died at age 75. He had battled dementia for several years.

Seaver was selected by the Mets in a special draft in 1966 after his contract with the Braves was nullified by Major League Baseball. He spent just one year in the minors and won the 1967 National League Rookie of the Year with a 16-13 record and 2.76 ERA for the last-place Mets.

Seaver won the Cy Young three times, all with the Mets. He remains the franchise leader in most career categories, including 198 victories, 2,541 strikeouts.

Tonight baseball fans and all New Yorkers mourn in unison.

Tom Seaver was not only a baseball player — he was a Miracle Met who brought skill and honor to the game.

The family of New York extends our deepest sympathy to his family and fans.

Tom Seaver, the greatest Met of all time, dies at 75: https://t.co/wEXxzXeOqv pic.twitter.com/BpsvvIIJbB