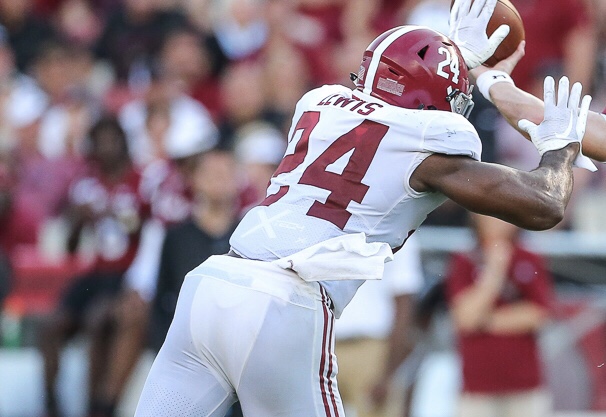 It’s Week 3 of the 2020 NFL season, and I have yet to hear any glaring news about my projected steal from this past draft, Terrell Lewis. For the past two weeks, I’ve checked box scores to see what the former Alabama standout had been doing. As I scanned down the names of defensive contributors thus far in the season, his name remained absent. Surely there was a mistake. Lewis had been drawing high praise from his coaching staff and analysts alike. Teammates have been raving about him. As a matter of fact, teammate Michael Brockers thought Terrell would dethrone his spot in the defensive lineup. However, nothing. This prompted me to do a little detective work. What I found was very disappointing. Terrell Lewis has been placed on the reserve/non-football injury list.

The reason for this placement was due to infection concerns stemming a procedure performed weeks ago. Terrell was experiencing atrophy on his knee. This led his activity to be halted until team doctors could come up with a remedy. There is good news. Rams’ head coach Sean McVay did confirm there was no infection and that Lewis’ return to the gridiron is expected to be a lot sooner than anticipated. Staff originally thought Rams’ fans would have to wait until Week 7 for his highly anticipated debut. Instead, thankfully, it looks as though it will happen in Week 4 instead.

This is another unfortunate road block in the often injured Lewis’ journey. Although very impactful, his time on the field at Alabama was limited due to serious injury. He was absent for a total of 14 games due to a torn ligament in his elbow and suffering a torn ACL. Lewis was able to return for his final season though and experienced no setbacks. The once projected first round draft selection seemingly returned to his old form, coming up big, often in crucial moments. He finished the 2019 campaign with 6 sacks and was named to the All-SEC second team. However, uncertainty from his injury riddled past caused teams to pass on him until being selected by the Los Angeles Rams in the 3rd round, 84thoverall.

This was not only a setback for Lewis, but the Rams also. They already lost projected starter Travin Howard for a year due to a torn meniscus. In addition, former Alabama teammate A’Shawn Robinson has been placed on injured reserve as well. His return has been undisclosed. McVay remains optimistic about Terrell Lewis’ return though. “He’s (Lewis) working. He’s doing a good job with his rehab and kind of the same with A’Shawn (Robinson). But, we’ll be able to revisit the possibility of him returning sooner than A’Shawn,” McVay said recently.

Lewis’ insertion into the defense is something the Rams are desperately seeking. Help is greatly needed at the linebacker position and edge rushers just aren’t generating the kind of pressure that could wreak havoc against their opponents. Hopefully, come Week 4, the Rams will get their wish and my initial projection of Lewis’ success will prove to be true.