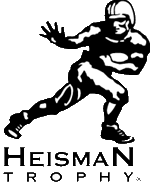 The Heisman Trophy will be presented Jan. 5, but without the usual ceremony held in New York City, and the finalists will be revealed on Christmas Eve.

The reworked Heisman schedule was revealed Saturday on ESPN. The deadline for Heisman voters to submit their ballots is now Dec. 21, two days after the conference championship games are scheduled to be played.

ESPN just announced on College GameDay that this year's Heisman Trophy winner will be named on Jan. 5. Voting will end Dec. 21 (after the conference championship games), with finalists set to be revealed on Dec. 24.