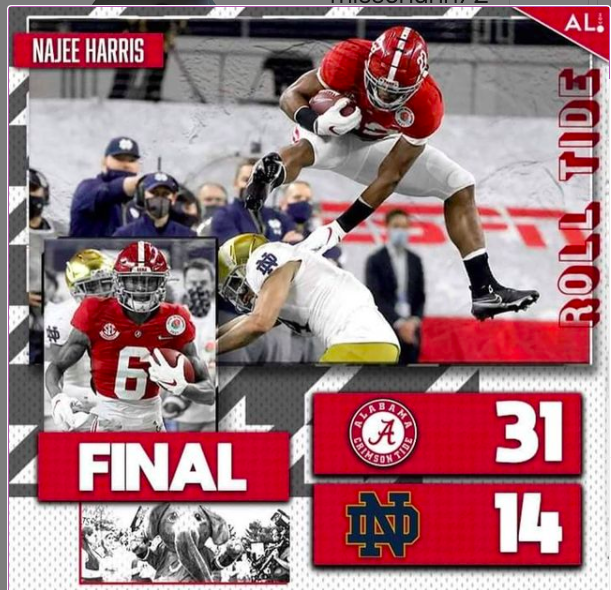 After taking a hiatus from not only the national championship game, but the playoffs as a whole in 2019, the Crimson Tide returned to its familiar stomping grounds. This time it was in the Rose Bowl. After completing one of the most impressive seasons in recent memory, Alabama entered this contest as 19.5 favorites over the Fighting Irish.

It didn’t take long to justify the odds projected by Vegas as Devonta Smith scored on swing pass from Mac Jones. This capped a 7 play, 79 yard drive. After forcing Notre Dame to punt on the ensuing possession, the Crimson Tide found immediate success. Before ultimately scoring, the entire world witnessed a mind blowing hurdle by Najee Harris over a Notre Dame defender. This feat, which led to a 53-yard pickup, has gone viral on all social media platforms. By doing so, there really is no need for him to have his vertical leap tested at the NFL Combine. After that, Mac Jones tossed it to a wide open Jahleel Billingsley for a 12-yard touchdown.

It looked as though things were on their way to getting out of hand. However, Notre Dame muscled their way down field on a touchdown scoring drive of 75 yards on 15 plays. Most of those plays were runs highlighted by the incredibly talented Kyren Williams. However, Irish fans would not be able to relish the moment for very long. They stood by helplessly as Heisman finalist Mac Jones carved up Notre Dame defenders en route to another Crimson Tide touchdown. Leading 21-7, Alabama closed out the half.

After sputtering on the opening possession of the second half, the Crimson Tide came alive after linebacker Christian Harris intercepted Ian Booke at their own 38 yard line. Five plays later, Mac Jones found Devonta Smith for a 7-yard touchdown. Beyond that point, Nick Saban’s crew  were in firm control and cruised the rest of the way in the 2nd half. Although Notre Dame managed to get one touchdown late, they were never any real threat to Alabama. They just couldn’t matchup with the weapons Mac and company brought to this contest.

The Fighting Sabans defeated Notre Dame soundly 31-24. Now, Alabama heads to Miami with hopes of winning their 3rd national title in six seasons, 18th overall. This also marks their 8th title game appearance in Nick Saban’s 14 seasons as head coach. Should they come away as victors, Nick Saban will break the record for most national titles by a head coach. He is currently tied with Paul “Bear” Bryant. In this record breaking season for the Crimson Tide, it would come as no surprise that record too will be broken.