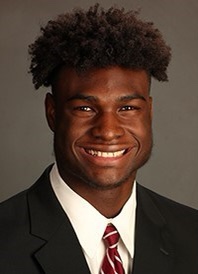 After turning in a dominant performance during his first year at the University of Alabama, linebacker Will Anderson was named to the Freshman All-American team. Along side him was teammate Malachi Moore. Shortly after this announcement, Anderson received yet another honor by the Football Writers Association of America. He was named the Shaun Alexander National Freshman of the Year by the organization.

Alabama outside linebacker Will Anderson has been named the Shaun Alexander FWAA national freshman of the year.

Five-star recruit who very much lived up to the hype in his first season in Tuscaloosa. Had seven sacks in Alabama's final six games.

Coming into the 2020 season, Will Anderson received a lot of praise before taking his first collegiate snap. One of those credited with giving Tide fans lofty expectations was none of than Stephen M. Smith of Touchdown Alabama Magazine. He had the opportunity to witness Anderson in several preseason practices. “He was very aggressive. Quick first step, highly explosive…but the strength to win the edge too. He’s not just a quick-twitch guy, but a true edge setter outside. He won at the point of attack,” said Stephen M. Smith. His endorsement continued on throughout the summer and into fall camp. He even drew a comparison to another former Crimson Tide standout. “In the practices I saw and watching his high school tape, I saw Tim Williams,” Smith added.

Will Anderson became a force, and perhaps an unrelenting terror as the 2020 season progressed. He was a matchup nightmare for anyone who dared to oppose him. It seemed as though he grew stronger as the season progressed. Will had several key stops in big moments. One of those stops included a game winning sack of Heisman finalist Kyle Trask in the SEC Championship Game, propelling the Tide to yet another conference title. His dominance continued on through the College Football Playoff and National Championship.

Anderson started every game as a freshman. In his first season with the Tide, he led the SEC and all national freshmen with 7 sacks while adding 10.5 tackles for loss. The young man also had 60 quarterback pressures which ranked him second nationally. Since 2014, Will ranks 1st in the same category for most by a freshman. I would venture to say that he’s also probably the most talked about newcomer at his position since the late great Derrick Thomas as well.

Most QB pressures by a true freshman since 2014:

Make no mistake, with every accolade Will Anderson has received, came nonstop hours of effort and hard work. The man never had an off switch. Perfecting his craft was the utmost priority to him. It caught the attention of his teammates quite often. “Will Anderson’s a listener, great learner. He comes in every day ready to work. He’s one of the first guys at the facility for practice. Goes hard every play… He works hard every day, and we love him,” said Alabama safety Jordan Battle. Keep in mind though, this is only the beginning. We mustn’t forget that he’s only played his first season. The future is insanely bright. “Dude can be an All-American. One of the best sack specialists to play at Alabama,” Stephen M. Smith of Touchdown Alabama Magazine added. I have to agree with my associate. Many NFL organizations can probably say the same.