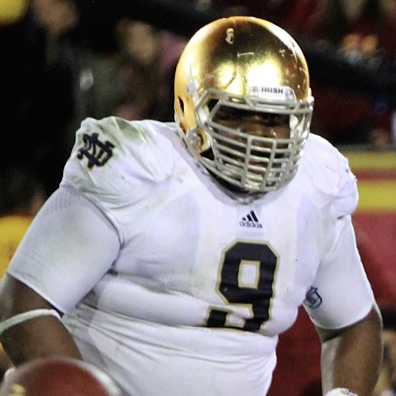 Just weeks ago, former Alabama defensive lineman Lorenzo Washington passed away at the very young age of 34 years old. Now, tragedy has struck yet again. However, this time it was in the Notre Dame community. After being reported missing this past Wednesday, Louis Nix III was found dead by local Jacksonville County, Florida authorities.

Nix’s mother reported her son missing after he drove away in a gray 4-door Hyundai Azera. After a considerable amount of time had passed without communication, his mother became worried and contacts local authorities. This behavior was unusual for her son and she believed that he may have been in danger.

Prior to his disappearance, Louis Nix was shot in the chest at a gas station during an attempted robbery. This occurred back in December. His mother disclosed that although it happened, she didn’t believe it was correlated to his disappearance. To her and those that knew him best, the former Notre Dame star had no enemies. He was highly revered. However, she did note that in the days leading up to his disappearance, he was very hesitant to leave his home. He often kept watch of his surroundings.

Former Norte Dame DT Louis Nix, who was a third-round pick of the #Texans in 2014, was found dead tonight after he had been reported missing since Tuesday, his family confirmed to @wjxt4.

He was only 29 years old. Way too young. RIP… https://t.co/MTOnxlchoS

During his time with Notre Dame, Louis Nix III was one of the top interior defensive linemen in the country. His outstanding play helped the Fighting Irish reach the BCS National Championship game in 2012. During his tenure in South Bend, he amassed 121 tackles, 14 tackles for a loss, and 2.5 sacks. For his efforts, he was rewarded with 3rd round NFL Draft selection by the Houston Texans.

His career in the NFL spanned from 2014-2017. He spent time with the Texans, New York Giants, Washington Football Team, and Jacksonville Jaguars. Unfortunately for the once promising defender, his career was cut short by a series of serious knee injuries. So, he humbly walked away and began life after football.

Much like the passing of Lorenzo Washington, Louis Nix III’s passing is devastating. 29 years old is far too soon for anyone to leave this world. His death greatly affects not only those in the Notre Dame community, but his family and inner community as well. Details of his passing still remain unclear. One is for certain though. His family and loves ones need our prayers. So, take a moment, be thankful for those around you and lift those who loved him up in prayer.