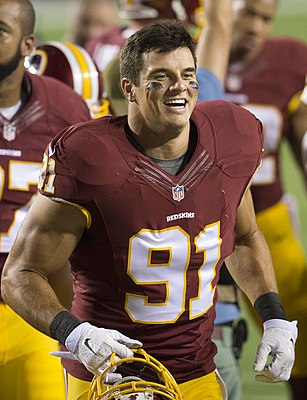 Ryan Kerrigan said goodbye to Washington in an Instagram post Sunday night. The longtime Washington edge rusher is staying in the NFC East.

Washington’s all-time sack leader, with 95.5 in a decade with the club, announced Monday he’s signing with the Philadelphia Eagles. The team made the move official soon after, agreeing to terms with Kerrigan on a one-year deal.

“I’ll never be able to sum up what these past 10 years have meant to me in an Instagram post, but what I can say is that they have been some of the best of my life,” Kerrigan wrote. “I hope you had as much fun watching me as I did playing for you. Thank you, Washington, for everything.”

Kerrigan played college football at Purdue, where he was recognized as a unanimous All-American as a senior, and was drafted by the Washington Football Team, then known as the Redskins, in the first round of the 2011 NFL Draft.

Roster Move: #Eagles have agreed to terms with DE Ryan Kerrigan on a one-year contract. pic.twitter.com/x8S0zGve8q

Ryan Kerrigan announced he is signing with the Eagles.