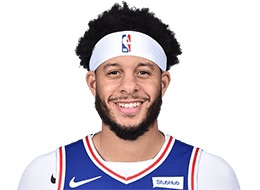 With their backs pressed firmly against the wall and facing elimination in Game 6 on Friday night, the Philadelphia 76ers responded in a major way. It wasn’t easy, but the Sixers overcame an early double-digit deficit to pull out a 104-99 win over the Atlanta Hawks to force a decisive Game 7 on Sunday night in Philadelphia. The win was an impressive one for the Sixers, especially after they blew large leads in each of the previous two contests. The fact that they were able to bounce back shows some impressive resilience on their part.

Tobias Harris and Seth Curry led the way for Philly, as they both scored 24 points, while Joel Embiid added 22 points and 13 rebounds.

Tyrese Maxey, declared off limits by the Sixers in James Harden trade talks in January, is now getting crunch-time run in Game 6 in Atlanta as Philadelphia tries to save its season.