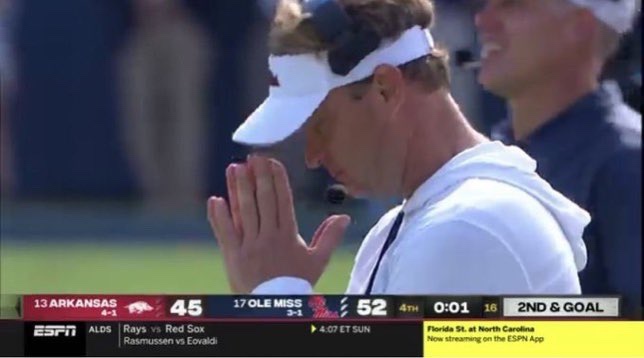 Ole Miss and Arkansas combined for 61 first downs, 1,287 yards, 103 points and one insane finish on Saturday as the No. 17 Rebels escaped with a 52-51 over the visiting No. 17 Razorbacks. The wild game ended with Arkansas quarterback K.J. Jefferson firing an incompletion on a two-point conversion attempt with no time left on the clock.

Even then it wasn’t clear that the game was truly over, as a penalty flag temporarily halted the Ole Miss celebration. The penalty was on Arkansas, however, which allowed the Rebels to resume their celebration. A week after his now-infamous “get your popcorn ready” remark before his team’s loss to No. 1 Alabama, Ole Miss coach Lane Kiffin told ESPN after the game, “finally, we can go have some popcorn.”

WHAT A FINISH IN OXFORD!

Arkansas went for the win, but fell just short on the 2-point conversion at Ole Miss.

“game of the year”
– me, after watching the Ole Miss/Arkansas ending

“game of the year”
– me, three minutes later, watching the Oklahoma/Texas ending