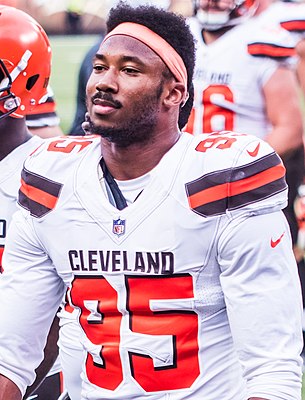 Cleveland Browns’ Myles Garrett signed a five-year extension worth $125 million making him the highest paid defender in the NFL.

But was Garrett overpaid?

Ryan Christa from the Sports Cast says that he’s not surprised with the signing, especially coming from the Cleveland Browns who has had a history of big contracts outside the quarterback position.

But every athlete is overpaid at some point. Garret is a beast, very good, but depending on his character, we will see if he was motivated by money or greatness.

The Defensive End market is always going up every year to combat the elite passing league QBs.

Garrett had an incident during the Browns’ November 14 game against the Pittsburgh Steelers. With eight seconds left in the game, Garrett pulled Steelers quarterback Mason Rudolph to the ground and held him there after the latter threw a screen pass to running back Trey Edmunds. A fight ensued that resulted in Garrett, Pouncey and Browns defensive tackle Larry Ogunjobi being ejected.

The next day, the NFL suspended Garrett indefinitely; he missed the remainder of the 2019 regular season and postseason. He was also fined $45,623.Garrett’s appeal failed on November 20; he claimed, without evidence, that Rudolph directed a racial slur at him.

Now with his new contract, will Garrett meet expectations?

Garrett played college football at Texas A&M and was drafted by the Browns first overall in the 2017 NFL Draft.

Garrett was the highest-rated defensive player ever recruited by Texas A&M, where he became a two-time All-American while playing for the Aggies, racking up numerous other awards for his stellar defensive play. Upon joining the Browns, his rookie season was limited due to injuries, but Garrett emerged after the latter half of that year and has become one of the premier edge rushers in the NFL. In 2019, Garrett was suspended indefinitely for a fight occurring in a game against the Pittsburgh Steelers before being reinstated in early 2020.