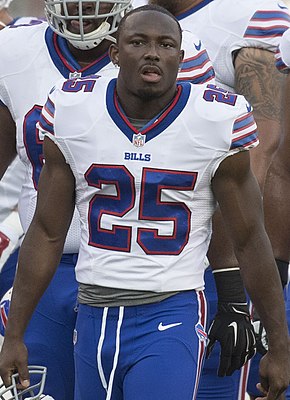 Free-agent running back LeSean McCoy has reached an agreement on a short-term contract with the Tampa Bay Buccaneers.

League sources told ESPN and NFL Media on Thursday that McCoy agreed to a one-year deal worth more than $1 million with the Bucs. The team has yet to confirm the pact.

McCoy — who won his first Super Bowl ring as a member of the Kansas City Chiefs last season — will compete with Ronald Jones and Dare Ogunbowale for touches. Jones took over duties on first and second down for the Buccaneers in 2019 but struggled at times in pass protection. Ogunbowale served as the team’s third-down back.

LeSean Kamel McCoy (born July 12, 1988), nicknamed Shady, is an American football running back for the Tampa Bay Buccaneers of the National Football League (NFL). He played college football at Pittsburgh and was drafted by the Philadelphia Eagles in the second round of the 2009 NFL Draft. He has also played for the Buffalo Bills and the Kansas City Chiefs.
McCoy attended Bishop McDevitt High School in Harrisburg, Pennsylvania, from 2002 to 2006. In his senior year of high school, McCoy suffered a major ankle injury, which threatened his career. In his first year at Pittsburgh in 2007, McCoy rushed for over 1,300 yards and recorded 14 touchdowns. In 2008, McCoy was selected as a second-team All-American. His 21 rushing touchdowns were third in the nation, only one behind the two leaders.
In 2010, McCoy took over as the starting running back for the Eagles, and broke the 1,000 yard rushing barrier. In 2011, McCoy was named First team All-Pro by the Associated Press. In 2012, McCoy suffered a concussion that limited him to only 12 games. In 2013, McCoy led the NFL in rushing yards with 1,607, shattering the team’s individual single-season rushing yards record that stood for 34 years. McCoy went on to become the all-time leading rusher for the Eagles after the 2014 season, breaking the record previously held by Wilbert Montgomery.
In the 2015 offseason, McCoy was traded to the Buffalo Bills for linebacker Kiko Alonso. After the trade, he signed a new five-year contract worth $40 million. McCoy made the Pro Bowl in each of his first three years in Buffalo, helping the team snap a 17-year playoff drought, and has become one of a few select NFL running backs to surpass 10,000 career rushing yards. After playing four seasons with the Bills, he was released prior to the 2019 season and signed with Kansas City.