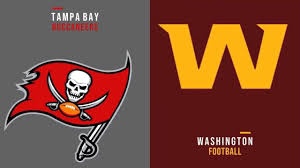 The Tampa Bay Buccaneers won 31-23 against the Washington Football Team. The Bucs offense carried them through out the game. Brady had 381 yards on 22/40 passing attempts and 2 touchdowns. Brady was sharp early but struggled in the second half. Mike Evans was his primary target with 119 yards on 6 rec. Fournette did the dirty work bullying the Washington secondary around he 93 rushing yards and one touchdown.

For the Washington Football Team they surprised a lot of people. Many didn’t give them a chance to beat Brady and they almost pull off the upset. Heinicke went for 306 yards on 26/44 passing attempts and had 1 touchdown. Nobody saw the back up QB almost out dueling the goat Tom Brady. Heinicke also lead Washington in rushing with 46 yards. Cam Sims was another stand out player he had 104 yards on 7 Rec. The Washington Football Team had a couple of defensive mistakes that could’ve won them the game but failed to capitalize. Heinicke played great for a backup but he’s still a backup. The Buccaneers defense forced him to beat them and he failed.